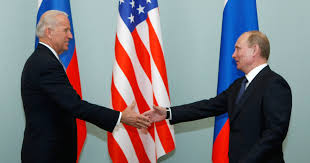 Chances for anything resembling normalized Russian/US relations are virtually nil.

Both right wings of the US war party are militantly hostile toward nations free from their control — notably Russia, China and Iran.

Since Biden replaced Trump by brazen election rigging, US relations with Russia have been more dismal than any previous time throughout the post-WW II period.

Putin admitted that bilateral relations "deteriorated to its lowest point in recent years."

In recent memory is more accurate. Perhaps they've never been worse than now with no possibility of improvement.

Looking ahead, nothing remotely suggests a softening of US policy.

Relations with Russia are highly likely to worsen, not improve.

"(O)ne of the issues that we consistently note is the egregious human rights situation in Moscow, in Russia, and the steps that the Russian Government has taken (sic)."

Fact check: The world's leading human rights abuser USA at home and worldwide — a one-party state with two right wings — is contemptuous of peace, cooperative relations with countries free from its control, and the rule of law.

In stark contrast to US fantasy democracy, Russians have the real thing under Vladimir Putin.

As explained in a previous article,  Russian legislation bans founders, leaders, members, and supporters of extremist and terrorist organizations from seeking elective office for a specified period of time.

The measure aims to prevent  elements involved in serving interests of hostile powers from undermining Russian democracy to preserve its sovereign independence from foreign control.

No action was taken so far against Navalny's so-called Anti-Corruption Foundation — a front group for his fifth column activities.

Like his boss and other Biden regime officials, Price is a serial liar.

Nothing they say can be taken at face value.

Like their predecessor regimes, the rules of law never interferes with US war on humanity at home and abroad — including use of illegal sanctions as weapons of war by other means.

Russia — and Vladimir Putin personally because of his preeminent world leadership status — are prime US targets for vilification and hostile actions.

When Putin meets with Biden's impersonator in Geneva next week — accompanied by Blinken for damage control duties — they'll use the summit to accuse Moscow of all sorts of things it had nothing to do with like many times before.

No matter how talks are portrayed in the US, West, and Russia, there's no chance for anything positive — so it begs the question.

Why did Putin agree to a highly publicized meeting that can only turn out poorly for Russia and him?

The Biden regime wants the meeting to vilify Russia and Putin on the world stage.

The summit will resemble a rigged sporting event or US presidential election 2020.

Dark forces knew results in advance, the public none the wiser.

Infested with ideologically over-the-top right-wing extremists, the Biden regime is perhaps the most dangerous one in US history.

Its elevation to power by foul means heightened the prospect for direct confrontation with Russia, China, and perhaps other nations.

Dominant hardliners in Washington need these countries as invented adversaries to keep pouring trillions of dollars down a black hole of waste, fraud and abuse — on the phony pretext of protecting the nation from enemies that don't exist.

On Friday, NBC News interviewed Putin in Moscow ahead of next Wednesday's summit.

Dubiously saying "there will not be any (US) impulse-based movements," he defied reality by claiming to be able to work with the Biden regime.

During a 2011 meeting with Putin, then-vice president Biden said Russia's president doesn't "have a soul."

After usurping power, he denigrated Putin further by calling him a soulless "killer."

Biden threatened to make Putin "pay a price" for nonexistent Russian US election meddling, nonexistent poisoning of Navalny, and other invented reasons.

Washington considers Russia a mortal enemy — for its sovereign independence, for smashing US supported ISIS and its other jihadist foot soldiers, for turning the tide of battle in Syria, for defeating Washington's imperial project in the country and challenging it overall.

No prospect exists for improved bilateral relations. Good faith diplomatic outreach to the US is a waste of time.

Promises when made by its ruling regimes are hollow, betrayal virtually always following.

A state of undeclared US war on Russia by other means exists.

Chances for turning a page for more normalized relations with the US don't exist.

It's why Putin's participation in summit talks at best will be an exercise in futility, more tragedy and farce than substantive.

At worst, they'll expose Russia and Putin to unjustifiable vilification on the world stage and thus turn out disastrously.

Iran got it right by refusing to meet with Biden regime representatives in Vienna for JCPOA talks.

Russia got it wrong by agreeing to summit talks — knowing nothing positive will come from them.