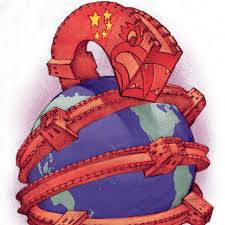 Psychologist Abraham Maslow's quote about when a hammer is your "only tool…every problem (is) see(n) as a nail" applies to US foreign policy under both right wings of its war party.

Like its predecessor, the Biden regime considers nonbelligerent China the top US threat.

Trump defied reality by calling Beijing a "threat to the world (sic)."

Calling for China "to behave like a normal country (sic)," Esper ignored that the common foreign policy thread of the above countries he named as top US adversaries.

Modern-day China and the Russian Federation never attacked another country.

Nor did North Korea and the Islamic Republic throughout their history.

These and other nonbelligerent countries — free from US control — prioritize cooperative relations with other nations — confrontation with none.

In stark contrast, belligerent USA wages forever war on humanity, how it's operating today at home and abroad.

He also called for partnering with other nations to confront Beijing on trade and human rights.

Biden's national security advisor Sullivan called for US imperial partners to ally in confronting China on the world stage.

Treasury Secretary Yellen vowed to "use the full array of (US) tools" against what she falsely called "abusive" Chinese practices.

Commerce Secretary Raimondo slammed what she claimed are actions by Beijing that are "anticompetitive, hurtful to American workers and businesses, and coercive (sic)."

On Wednesday, Austin again called China the top US threat in ordering the Pentagon to treat Beijing this way and not just state it rhetorically.

The hostile to China task force headed by Ratner echoed remarks by the US Indo-Pacific Command that said "there's been less walk than talk" on countering nonbelligerent China.

Much like against all nations free from US imperial control, dominant hardliners in Washington falsely accuse China of all sorts of things its ruling authorities have had nothing to do with.

"China's effort to gain strategic influence across the globe is well known (sic)."

"What's the message to the world if you're cutting defense (sic) in the time of a challenge like this (sic)?"

According to Defense One, Biden's war department may implement a new Indo-Pacific force posture that includes deployment of increased numbers of troops in more regional locations — rather than continuing to concentrate them mainly in Japan, South Korea and Guam.

On Thursday, a US war department press release said the following:

In cahoots with US imperial partners, Austin said initiatives he approved on countering China will contribute to "development of the National Defense Strategy we are working on (to) bolster deterrence" at a time when Washington's only enemies are invented.

No real ones exist — not China, Russia, North Korea, Iran, or any other countries.

In stark contrast, the US is an unparalleled enemy of all nations free from its hegemonic grip, as well as ordinary people everywhere — including at home.

If all nations operated internationally like invented US enemies, peace, stability, mutual cooperation with other countries and compliance with international law would replace Washington's endless wars by hot and/or other means in cahoots with its imperial partners against humanity worldwide.