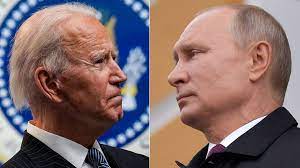 Iran got it right by refusing to meet with Biden regime representatives in Vienna for JCPOA talks.

Two months of negotiations with US E 3 surrogates achieved nothing toward resolving key differences between Iran, the US and its European colonies.

Chances of the Biden regime returning to the JCPOA as affirmed by Security Council Res. 2231 — making it binding international law — are virtually nil.

"(T)he fifth round of the Vienna talks did not become final as the negotiators hoped."

Nor will further rounds achieve what earlier ones failed at.

Key is longstanding US policy toward all nations free from its hegemonic grip — wanting them transformed into subservient vassal states.

Key as well is pouring countless trillions of dollars down a black hole of waste, fraud and abuse for the US military/industrial/security complex to confront invented enemies like Russia and China.

They don't exist so had to be invented to keep justifying what's unjustifiable.

The above reality defines the futility of scheduled June 16 Russia/US summit talks if held.

It's notably so because Putin will meet with Biden's impersonator, an imposter only able to recite remarks scripted for him.

He's out-of-the-loop on all things related to decision-making.

The real Biden is a shadow of his former self.

Afflicted with dementia, he's powerless, an illegitimate figurehead unable to complete a sentence without mumbling and bumbling incoherently.

Summit talks with Putin, if held, will be more tragedy and farce than substantive. For Russia's leader, they'll be held with an illegitimate figure who falsely called him a "killer" last March.

There's no chance to improve bilateral relations because of Russian independence from US control and its need for invented enemies.

Notably since Obama/Biden replaced democratic rule in Ukraine with Nazi-infested fascist tyranny — and Crimeans rejoined their historic Russian homeland — Moscow's relations with Washington have been more dismal than any previous time in modern memory.

Since Biden replaced Trump by brazen election rigging, they plummeted to an all-time low — their worst state since the aftermath of the 1917 Russian Revolution that ended czarist tyranny.

Shifting from calling Russia the evil empire to defusing bilateral tensions under Ronald Reagan and cooperating with Mikhail Gorbachev to end the Cold War long ago ended.

Hostile to peace and stability hardliners in charge of Biden's geopolitical agenda are uncompromising on all things related to US-sought unchallenged global dominance by whatever it takes to achieve their aims.

They reject genuine outreach by Putin for cooperative relations over confrontational ones.

"(W)e need to try finding ways of mending the relations, which are at the lowest level as for now."

"We are all well aware of this fact."

"We are not trying to create the impression that there will be some breakthroughs, some historic fateful decisions…"

Lavrov added that since establishment of the Russian Federation in December 1991, the US-dominated West ignored its international obligations — including what their ruling regimes agreed to observe.

"The conclusion is very simple…They have some kind of malicious plans against Russia" — because it's free from US hegemonic control, Lavrov understands but didn't say.

Discussing scheduled summit talks on Friday, Kremlin spokesman Dmitry Peskov stressed that while Putin seeks improved relations with the US, "the only thing that makes it possible is prioritizing mutual respect and considering each other's interests," adding:

"It will be impossible to (improve) relations without it."

"Any attempts at diktat or mentoring are doomed to fail, and what is more, they will disrupt the hesitant dynamic towards establishing some kind of dialogue."

It "would be wrong to have high hopes" for summit talks to produce positive results.

"The potential for us disagreeing and even conflicting is so great that there is no reason to expect any progress in reaching mutual understandings."

Why engage in what has no chance for achieving anything positive?

Why give Washington a platform for bashing Russia more than already on the world stage?

Ahead of talks as explained in earlier articles, the Biden regime imposed illegal sanctions on Russian entities and individuals for invented reasons.

It expelled 10 Russian diplomats from its Washington embassy on phony charges of espionage, and falsely accused Moscow of ransomware attacks.

Whenever US accusations are made against other nations and their officials, no verifiable evidence accompanies them because there is none.

With all of the above as backdrop — along with over a century of US hostility toward Russia, save for brief moments otherwise — what possibly can be gained from summit talks between Putin and Biden's impersonator?

Paul Craig Roberts believes the upcoming summit may be "a propaganda trap for the Kremlin" — a platform to repeat phony US accusations against Russia on the world stage.

Ahead of what's scheduled for June 16 in Geneva, the highly publicized meeting already failed dismally.

The summit's epitaph is already written.

No chance for normalization — or anything positive in bilateral relations — exists!