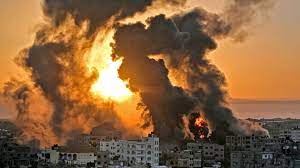 More Israeli Aggression Ahead on Gaza?

Interviewed on Israel's Channel 13, he said Operation Guardian of the Walls aggression against Gaza last month "ended, or at least its first stage did."

"The next stage will happen if we see that the security situation has changed (sic)."

"We don't have operations like this every week or every month because we understand the burden that this puts on (Israeli) civilians, especially on the home front."

"(W)hen we launched this operation, we had to make the most of it" while public opinion was supportive.

"It's all contingent upon the security situation (sic)."

"If we succeeded with this first stage, that's great. If we didn't, we'll have to continue."

Netanyahu regime aggression for 11 days in May was the fourth time since December 2008.

It's just a matter of time before a pretext is invented for round five.

Belligerents like Toledano dream war. When launched, the IDF tests the effectiveness of new terror weapons on defenseless civilians.

No such thing as durable ceasefire exists in the aftermath of all preemptive Israeli wars.

B'Tselem explained that "Palestinians living everywhere Israeli apartheid reigns – the Gaza Strip, the West Bank (including East Jerusalem) and within the Green Line – (were) subjected to an almost unprecedented scale of killings, destruction, violence and intimidation" over a short period of time last month.

Israeli terror-bombing and shelling targeted one of the world's most densely populated areas with no place to hide, nowhere to be safe from Israeli aggression.

The IDF admitted that its strikes came "at the cost of harming uninvolved individuals (in) crowded, populated neighborhoods."

In the aftermath of war, Gaza's illegal blockade continues.

Gazans in urgent need of medical treatment — unavailable in the Strip — are prevented from leaving.

Requests on behalf of other seriously ill or injured Gazans for treatment outside the Strip are also routinely rejected.

According to the Gaza-based Palestinian Center for Human Rights, "about 8,700 cancer patients" are prevented from receiving treatment in the West Bank, East Jerusalem or abroad.

It's at a time of "serious deterioration of the healthcare system in Gaza due to the Israeli-imposed closure (of the Strip) for the last 14 years."

Crisis conditions exist for two million Gazans at all times as long as blockade continues.

On May 30, the Gisha Legal Center for Freedom of Movement said the Netanyahu regime "continues to severely restrict travel to and from Gaza and is prohibiting all exit of goods for sale outside the Strip, as well as entry of fuel for Gaza's power plant, construction materials, and other items."

"Israel also continues to limit access to the 'fishing zone' it enforces in Gaza's sea space to a maximal distance of just six nautical miles offshore."

"The Union of Agricultural Work Committees reports that the Israeli navy has been firing at fishing boats and their crews within this area of sea as well."

On Wednesday, the Al Haq human rights group said last month's IDF terror-bombing and shelling of Gazan Water, Sanitation and Hygiene Infrastructure — as well as continued blockade — made conditions in the Strip "unlivable."

An acute shortage of virtually exists because of devastation from war and blockade that surely will remain in place if a new Israeli regime replaces the current one this month.

1 Comments in Response to More Israeli Aggression Ahead on Gaza?

Hey Steve! You suppose if Hamas would stop hiding near women and children after launching rockets into Israel less " "collateral" deaths might occur? Ya think? Oh and Stevy, here I have a short test for your antisemitic small mind. Let us know if you have any answers! THE STATE OF "PALESTINE" QUIZ 1) WHEN WAS THE STATE OF "PALESTINE" FOUNDED AND BY WHOM? 2) WHAT WERE ITS BOARDERS? 3) WHAT WAS ITS CAPITAL? 4) WHAT WERE ITS MAJOR CITIES? 5) NAME AT LEAST ONE "PALESTINE LEADER" BEFORE ARAFAT? 6) WHAT IS THE LANGUAGE OF THE "COUNTRY OF PALESTINE"? 7) WHAT WAS THE PREVALENT RELIGION OF THE "ANCIENT COUNTRY OF PALESTINE"? 8) WHAT WAS THE NAME OF ITS CURRENCY?