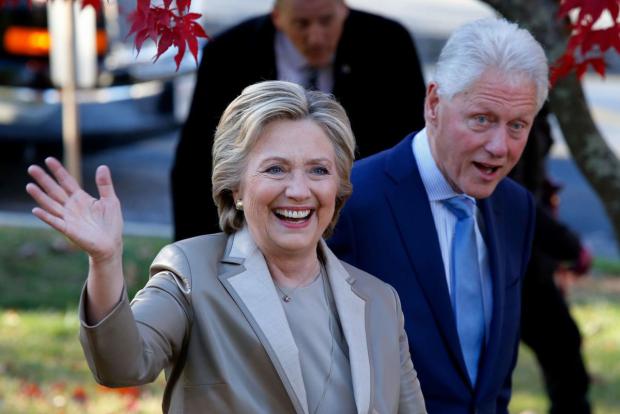 Unaccountable for years of unlawful practices in and out of government, the Clintons are one of America's most notorious crime families.

Bill and Hillary's foundation — including daughter Chelsea — is a money laundering racket, posing as a charitable NGO.

If law enforcement did its job, the foundation would have been shut down years ago — its trustees Bill, Hillary and Chelsea indicted and prosecuted for racketeering in violation of RICO legislation — according to former government forensic investigators John Moynihan and Lawrence W. Doyle.

Rarely ever are well-known public or private US wrongdoers held accountable for their criminal actions. Rare exceptions prove the rule.

The Clintons have been bulletproof for decades, most likely to stay that way throughout their private life.

Daughter Chelsea is cut from the same mold as Bill and Hillary.

She and her crime family parents are combatting what they call "vaccine hesitancy" — pushing toxic covid mass-jabbing instead of responsibly going the other way.

According to Chelsea — citing the pro-Western/pro-mass jabbing/pro-worldwide mass-toxification WHO — "vaccine hesitancy (is) one of (the) top global health threats (sic)."

Polar opposite is true. Vaccines are hazardous to health.

They don't protect as falsely claimed and risk contraction of the disease they're supposed to prevent.

According to an International Journal of Clinical Practice published study, titled:

"Informed consent disclosure to vaccine trial subjects of risk of COVID-19 vaccines worsening clinical disease," participants in covid jabbing trials are "more (likely to contract) severe (covid) disease than if they were not" jabbed for protection not gotten.

What she and her parents won't go near for themselves, they want mandated for ordinary people everywhere.

Wanting scientific evidence explained by truth-telling opponents of covid mass-jabbing silenced, she called for a "crackdown" on their right of free expression, adding:

"(T)here has to be more intensive and intentional and coordinated global regulation of the content on social media platforms."

What she calls "get(ting) informed (and) shar(ing) the facts" is all about brainwashing the public more than already.

In March, she hosted a virtual event that promoted mass-covid-jabbing to mass-toxify unwitting Americans more than already.

What she calls "keep(ing) our families and communities safe" is all about inflicting maximum harm on maximum numbers of people.

She considers truth-telling about the mother of all scams "anti-science."

"(H)ow do we make sure everyone has access to scientifically-sound and accurate information about (covid jabs) and other vital public health messages," she asked?

Her way is worlds apart from the right way.

Her way is pushing mind-manipulation by US/Western dark forces, Pharma, their bought and paid for "experts," and media press agents for all of the above.

The right way is ignoring their toxic propaganda, relying instead on truth-telling medical professionals, scientists, and alternative media sources.

The so-called Clinton Global Initiative University operates to manipulate the public mind to self-inflict harm — instead of advocating for and promoting what protects and preserves health and well-being.

The so-called pandemic shows up annually like clockwork — unaccompanied by fear-mongering produced mass hysteria and what's been mandated or otherwise promoted since last year.

The 9/11 mother of all false flags was the greatest state-sponsored scam of all time until seasonal-flu-renamed covid mass deception showed up early last year.

Continuing with no end of it in prospect, most people were conned to believe that protection against what's going on comes through a syringe.

US-led Western dark forces and co-conspirators like the Clintons — and many other high-profile figures like them — are going all-out to create mass-casualties from mass-jabbing with toxic experimental drugs no one valuing their health and well-being should touch.

Figures supporting what they won't go near themselves are guilty of criminality against humanity for promoting slow-motion genocide worldwide.

That's today's disturbing reality, most likely to worsen ahead, not ease.