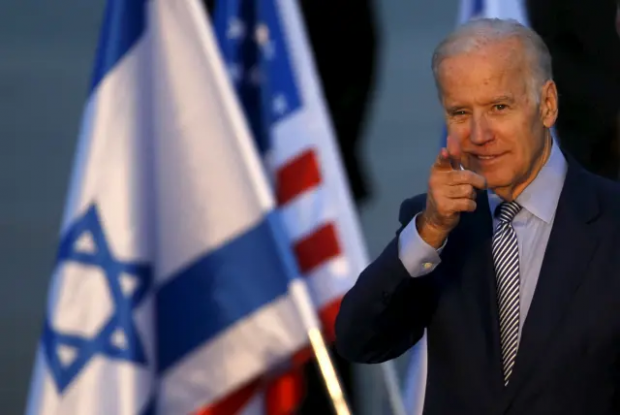 The Biden regime blocked a statement — demanding that Israel "cease settlement activities, demolition and evictions" of Palestinians from their homes and land, according to AFP.

Short of a binding international law resolution, the watered down statement expressed "grave concern regarding escalating tensions and violence in the occupied West Bank, including East Jerusalem."

It called for "refraining from provocative actions and rhetoric, and upholding and respecting the historic status quo at the holy sites."

Since establishment of a Jewish state on stolen Palestinian land in 1948, the US supported and ignored the worst of Israeli crimes of war and against humanity against Palestinians and regional states.

The Biden regime "condemns in the strongest terms the barrage of rocket attacks fired into Israel" from Gaza.

He was silent about IDF terror-bombing of multiple parts of the Strip, killing at least two dozen Gazans, injuring many more, traumatizing thousands, causing extensive damage.

At the same time, he called Israeli aggression "self-defense."

Asked if he condemned Israeli killing of Palestinian children, he ignored reality by claiming:

"(W)e don't have independent confirmation of facts on the ground yet, so I'm very hesitant to get into reports that are just emerging."

Instead of denouncing Israeli plans to dispossess Palestinian Sheikh Jarrah neighborhood families of their homes and land, he largely ducked the issue, saying:

"We've been clear in urging the Israelis to act responsibly, to treat Palestinian residents with compassion and with humanity in this case."

Refusing to call East Jerusalem occupied, he said what's going on in the city "is a final status issue to be determined by the parties (sic)."

Ignored was that following the Oslo Accords over a generation ago, Palestinians got nothing in return but empty Israeli promises, colonization, apartheid, and occupation harshness.

They got nothing for renouncing armed struggle, recognizing Israel's right to exist, and agreeing to leave major unresolved issues for later final status talks. They're still waiting.

Major unresolved issues include an independent sovereign Palestine free from occupation, the right of return, settlements, borders, water and other resource rights, as well as East Jerusalem as exclusive Palestinian territory and future capital.

One-sidedly supported by the US — while pretending otherwise — Israel refuses to accept all of the above, its hard-wired policy for over half a century.

It includes delaying resolution of issues with Palestinians to facilitate continued theft of their land — wanting all valued parts of historic Palestine Judaized, including Jerusalem as Israel's exclusive capital, its Arab residents expelled, and diaspora Palestinians denied their right of return.

During a Monday press briefing, Price refused to condemn ongoing Israeli state terror against defenseless Palestinians — calling on both sides to show restraint instead, along with ducking responses to tough questions.

According to the Palestine Red Crescent Society on Monday:

"At least 612 Palestinians sustained injuries in the course of the day in (and around the Al-Aqsa Mosque compound) and the Old City of Jerusalem."

Rocket fire from Gaza on Israel followed its desecration of the holy site.

"We're very focused on the situation in Israel, West Bank, Gaza, very deeply concerned about the rocket attacks that we're seeing now (sic), that they need to stop (sic)."

"They need to stop immediately (sic)." But IDF terror-bombing of Gazan civilians is OK, according to longstanding one-sided US support for apartheid Israel.

On Monday, the Palestinian Center for Human Rights (PCHR) said the following:

"…Israeli Occupation Forces (IOF) violated al-Aqsa Mosque and its facilities, suppressed, and assaulted Palestinian worshipers and fired sound bombs and rubber bullets inside the Mosque and in its yards."

"As a result, 305 Palestinians, including 8 journalists, were wounded — 7 were deemed in critical condition."

"This serious escalation came only a few hours before a planned demonstration by thousands of Israeli settlers in Bab al-'Amoud area and near al-Aqsa Mosque's gates."

"Chief of Israel Police ordered a large force to raid al-Aqsa Mosque in an attempt to facilitate the entry of Israeli settlers, who were gathering in Bab al Magharibah, into the Mosque."

At the same time, "Israeli snipers topped al-Aqsa Mosque's western roofs, in addition to al-Qibli Mosque's roof, and then raided the Mosque, assaulted Palestinian worshipers, and fired rubber bullets, teargas canisters and sound bombs at them."

"As a result, dozens of Palestinians, old and young, men and women, who were detained inside the Mosque sustained wounds."

The Biden regime and its press agent media ignored virtually all of the above — in support of apartheid Israeli viciousness against defenseless Palestinians.