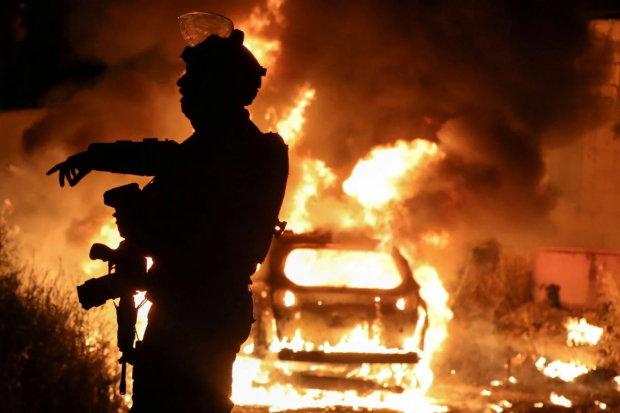 Israel's longstanding masterplan goal is for maximum numbers of Jews and minimum Arabs throughout the Jewish state and Occupied Territories.

According to Nuremberg Principles, ethnically cleansing people from their land is a high crime against humanity.

Israeli accountability was never forthcoming for mass-murder; destruction of homes, villages, crops and other property; as well as countless rapes and other atrocities — showing no mercy to defenseless Palestinian men, women, children, infants, the elderly and infirm for generations.

Reality was and remains worlds apart from Israeli coverup and denial of its crimes of war, against humanity, and other atrocities against defenseless Palestinians.

Since mid-April, clashes between Israeli security forces and Palestinians have gone on daily.

On Monday, Israel's High Court was scheduled to rule up or down on evictions of Palestinian families from East Jerusalem's Sheikh Jarrah neighborhood.

On Sunday, the Times of Israel reported the following:

After Palestinian families facing eviction "asked (Israeli) Attorney General Avichai Mandelblit to become a party to the case, (his) office asked the Supreme Court for two weeks to consider the matter," adding:

"The court gave Mandelblit until June 8 to consider whether he will become a party to the case."

"The planned evictions — already approved by lower courts — will not go forward in the interim."

"A new date will be determined within the next 30 days."

"In the meantime, until further notice, I order a freeze on the decision by the appellate court, which does not imply any position regarding" its ruling.

According to the Walla news site, a sealed affidavit by Mandelblit's office to Israeli Supreme Court justices warned that evictions of Sheikh Jarrah residents from their homes would greatly risk escalating tensions throughout the Occupied Territories.

Since establishment of the Jewish state in 1948, ethnic cleansing has been official policy.

In 1992, the UN General Assembly called forced ethnic cleansing "a form of genocide."

Israel is the world's leading offender, the worst of its high crimes supported and encouraged by US ruling regimes.

Time and again, Israel's High Court supported what under international law is a crime against humanity.

In May 2018, it ruled in favor of expelling about 1,400 Palestinian Bedouin Khan al-Ahmar community members from their homes — to make way for exclusive Jewish development on their land.

According to the High Court ruling, Netanyahu was given Illegal/legal cover to steal their land, destroy their homes and other structures, along with forcibly removing them if unwilling to leave on their own.

Most often when Palestinians petition Israel's Supreme Court to rule against Israeli ethnic cleansing, they're denied.

Palestinians can't live or build freely  on their own land without impossible to get Israeli permission.

"We will continue to fight this theft in our neighborhood, under any circumstances, even if the expulsion decision does eventually come."

"We will not cease our struggle until we achieve our rights."

Last week, Hamas official Mohammad Deif warned that "(i)f Israeli aggression against our people in the Sheikh Jarrah neighborhood does not stop immediately, we will not stand idly by."

The vast majority of US officials one-sidedly support Israel.

"Too many are silent or dismissive as our US tax dollars continue to be used for this kind of inhumanity."

"I am tired of people functioning (in) fear rather than doing what's right because of the bullying by pro-Israel lobbyists."

"This is apartheid, plain and simple."

"Where is (US) media coverage (about) Israeli occupation terror?"

She urged the Biden regime to "make clear to (Netanyahu) that (forced) evictions (of Sheikh Jarrah Palestinians) are illegal and must stop immediately."

She stopped short of stressing that Israeli ethnic cleansing throughout Israel and the Occupied Territories is longstanding Jewish state policy.

Nor did she explain that this abhorrent practice is a crime against humanity.

A handful of other US congressional members also expressed support for Sheikh Jarrah residents to remain in their homes.

"Police violence against Palestinians in #SheikhJarrah who only want to remain in the homes they've lived in for generations is state-sponsored persecution."

The above statements aside, the late Palestinian/American scholar/ activist for justice Edward Said once said "(v)irtually the entire Senate can be marshaled in a matter of hours into signing a letter to the president" in support Israel on most everything.

The same reality applies to the vast majority of House members and US bureaucrats.

The power of Israel and its lobby in Washington is pervasive, able to get what serves their interests most always.

The organization sent what it called "an urgent letter to senior Israeli officials, demanding they immediately order Israeli police forces to halt their violent incursions into the Al-Aqsa Mosque compound and refrain from excessive violence against Palestinian worshippers and emergency medical staff in and around the site…"

Adalah Attorney Wesam Sharaf stressed that "Israeli police incursions into the mosque compound, and the use of extreme violence and deadly weapons against Palestinian worshipers and medical staff is illegal, endangers the lives of worshipers, and violates their right to freedom of worship."

Adalah stressed that "(r)ather than protecting Palestinian worshipers and their right to freedom of worship, Israeli police are aiding extremist Israeli settlers (sew) violence and fear among the Palestinian residents of Jerusalem and visiting Muslim worshippers."

Whatever the outcome of East Jerusalem clashes and what happens to Sheikh Jarrah residents, longstanding Israeli persecution of Arab citizens and Occupied Palestinians continues with no relief in prospect.

In response to postponing an Israeli Supreme Court ruling on Sheikh Jarrah evictions until next month, Mohammed al-Kurd's statement likely expressed the view of many other Palestinians, saying:

"The genius of the Nakba was to extend its processes for decades, under the cover of racist laws."

"(W)e must raise our voice and intens(e) efforts with presence and solidarity on the ground in Sheikh Jarrah, and intensify our voice on social media platforms."

"The violence of the colonial occupation is widespread in our cities and has not stopped."

Nor will it without longterm intifada activism for long-denied justice.