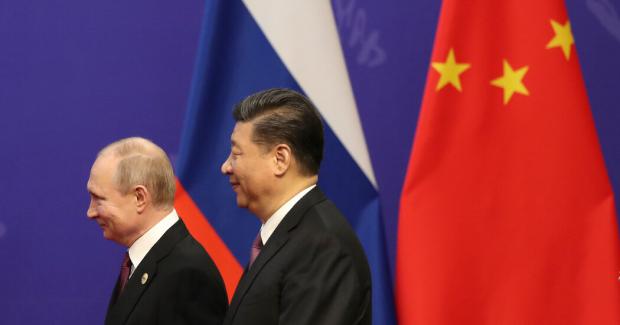 So do their press agent media, using state-supplied talking points.

The threat of pushing things too far toward global war 3.0 hangs like a sword of Damocles over humanity.

The risk of it has been around throughout most of the post-WW II period because of US abhorrence of peace, stability, and the rule of law.

Peaceful coexistence between Soviet Russia and the US was maintained even at times when relations were strained.

What both nations considered unthinkable is possible today, especially with hawkish Biden regime hardliners in power.

It's what he called a "potential enemy of the national interest…a distorted use of the nation's resources…fail(ing) to comprehend its grave implication(s)…(affecting our) livelihood (and) the very structure of our society."

Post-9/11, US regimes abandoned the ABM Treaty, the Kyoto and Paris climate control treaties, the INF Treaty, Open Skies, the JCPOA, and other agreements.

It withdrew from UNESCO and UN Human Rights Council.

Throughout the post-WW II period — especially post-9/11 — the US operates exclusively by its own rules.

Since usurping power, Biden regime hardliners have been recklessly elevating this policy to a higher level in pursuit of their hegemonic aims.

They're increasingly going where their predecessors stopped short of going, especially by risking confrontation with Russia and China.

The Doomsday Clock approaches midnight on their watch, the closest level ever to armageddon.

Along with an increased threat of nuclear war, US state-sponsored economic collapse, hardening totalitarian rule, and rage to mass-jab humanity with toxic experimental drugs pose an unprecedented threat to everyone everywhere.

If the ominous trend continues, free and open societies will be replaced by ruler/serf ones unfit to live in for most people.

That's where things are heading with no signs of abating.

A state of permanent abnormality is official US/Western policy.

Virtually everything mandated and promoted since last year is harmful to health, well-being, the rule of law, and societies fit to live in.

Things are more dire today than any previous time in modern memory because of undeclared US war on humanity, escalated by Biden regime hardliners.

Russia, China, Iran and other nations are forced to upgrade their military capabilities because of US threats to their security.

According to undemocratic Dem Rep. Tom Malinowski, the US is "in a contest with the Chinese government…about the most fundamental questions facing the world (sic)."

He and likeminded hardliners support for what Biden's double called for earlier, saying:

What's next, a declaration of war, including against nonbelligerent Russia?

On Tuesday, Reuters reported that Blinken and his G7 counterparts will "discuss ways of countering challenges from China and Russia" — that don't exist so they were invented.

According to Blinken, discussion in London will focus on China Tuesday morning, shifting to Russia in the PM.

US-dominated G7 claims about Sino/Russian "malign activity" apply to their own ruling regimes and complicit partners, not to Beijing and Moscow.

Beijing "is actively working to undercut the rules of the international system (sic) and the values we and our allies share (sic)."

We're all endangered by its reckless behavior on the world stage.

If their intention is greater US aggression than already on one or more invented enemies, do they have a 9/11-type false flag in mind to unjustifiably justify what could set the world ablaze by their recklessness.