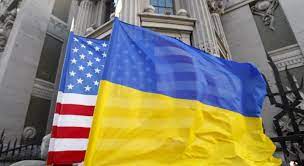 The USPA is all about bipartisan US support for Kiev's forever war on Donbass along Russia's border.

It's about destabilizing the area to try manipulating Moscow to intervene cross-border.

It's about getting European countries to ally with greater US hostility toward Russia by falsely claiming escalated aggression by its forces when none ever occurred against against any nation since the Soviet Union dissolved 30 years ago.

Approved by the Senate Foreign Relations Committee, the measure is assured of being overwhelmingly passed by Congress and signed into law by Biden — or his impersonator.

It has nothing to do with protecting US client state Ukraine's security at a time when its only threats are invented, not real.

It's all about supplying the pro-Western puppet Zelensky regime with weapons, munitions, military equipment, and other US support for aggression on Donbass along Russia border.

According to pro-war/Russophobe Senator Jim Risch:

"Ukrainians have a right to choose their own future (sic), and this bill contributes to that by supporting Western-style military reforms, lethal and non-lethal military equipment to defend itself from (nonbelligerent, nonthreatening) Russia (sic), and US diplomatic support for peace negotiations (sic)."

An amendment requires the White House "to report to Congress on whether 20 specific entities are subject to sanctions under the Protecting European Energy Security Act (sic)."

"(A)ll of these entities are currently involved in building out the Nord Stream 2 pipeline."

"US law (in breach of the UN Charter) requires that such entities be sanctioned (sic).

The pro-forever-war/anti-peace USPA requires the White House to report to Congress on whether more illegal US sanctions should be imposed on Russia's Nord Stream 2 gas pipeline to Germany and other Russian entities — as called for by the so-called Protecting Europe's Energy Security Act (PEESA)."

The measure also requires the State and Treasury Departments to inform Congress on "vessels that engage in (Nord Sream 2 and TurkStream) pipe-laying" — for purposes of imposing and maintaining illegal sanctions.

It maintains the myth of nonexistent democratic rule in Ukraine, what dominant US hardliners tolerate nowhere, especially not at home.

The measure pledges US support for deterring nonexistent "Russian aggression" against Ukraine, ignoring its forever war on Donbass as orchestrated and directed by Washington.

It pledges endless supplies of all things military related for warmaking — the Pentagon and US intelligence community using Kiev as a dagger targeting Russia's heartland.

It's also another way that dominant US hardliners seek to undermine Russia economically, politically, and in virtually all other ways.

It comes when tens of thousands of Ukrainian conscripts are massed near the contact line with the Donetsk and Lugansk People's Republics (DRR and LPR) in Donbass.

According to the Donetsk New Agency (DAN) on Wednesday:

"The mediators represented by the Russian Federation proposed today to endorse at the Contact Group level a statement on employing the mechanism of verification and prevention of ceasefire violations, provided for by the Package of Measures and backed by Ukraine since autumn 2020, effective the next day."

Despite seven variations in the proposed text to reach accommodation with Kiev, all were rejected — on orders by Biden regime hardliners, wanting endless war that risks spilling into Russian territory, not resolution.

Ukrainian forces "shelled the village of Spartak with three rockets."

They "shelled the village of Staromikhailovka with grenade launchers."

They "shelled Kominternovo with 120-mm artillery and grenade launchers."

They "targeted UAF positions in Opytne (Mayorsk, and Kamyanka) with an ATGM."

They "shelled UAF positions in Vodiane with 120-mm artillery."

They "targeted UAF positions in Talakivka (and Pavlopil) with grenade launchers."

All things related to endless Ukraine war on Donbass are controlled and directed by US, UK and EU hardliners.

Included is endless Western anti-Russia propaganda, Kiev supplying more of its own — based on US/Western talking points.

Along with the Indo/Pacific near China's borders and Middle East near Iran's, Eastern Ukraine bordering Russia is a key hot spot for possible global war 3.0 by accident or design by hegemon USA.

Along with rubber-stamp support for US direct or proxy wars on invented enemies by Britain, EU foreign policy chief Josep Borrell can be counted on to back hegemon USA on all things Russia and other nations on its target list for regime change.

On Wednesday he said that Brussels should be ready to confront Russia if it crosses what he called "red lines" on Ukraine.

Falsely accusing Moscow of Kiev provocations along the contact line with Donbass, he demanded that Russia cease what Ukraine is doing, adding:

Russia must fully implement Minsk I and II conflict resolution agreements it's been doing all along since their adoption in September 2014 and February 2015 respectively.

The same goes for the DPR and LPR in Donbass.

Following orders from Washington, Kiev's refusal to implement both protocols it agreed to is all about continuing forever war along Russia's borders as long as dominant US hardliners say so.