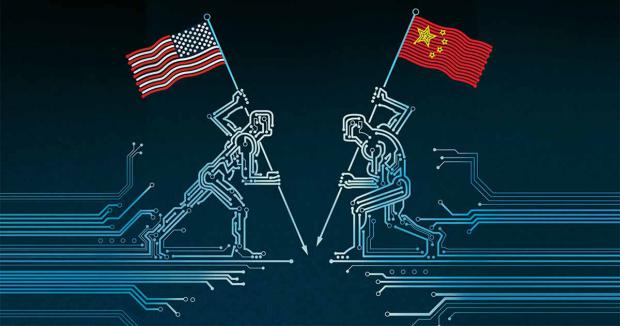 US Tech War on China

The US tolerates no nations free from its control or ones able to effectively challenge it politically, economically, technologically, or militarily on the world stage.

Washington's Indo/Pacific strategy involves advancing its regional footprint, including militarily in a part of the world where it doesn't belong.

US policymakers aim to marginalize, weaken, contain, and isolate China and Russia, an agenda doomed to fail.

Russian super-weapons are superior to the best in the West, developed at a small fraction of Washington's bloated military budget.

China is an economic, industrial, and growing technological powerhouse.

It aims to further its own interests and undermine China's — notably by wanting it excluded from global supply chains, especially for semiconductors and other hi-tech products.

Since Trump took office, scores of tech-related Chinese enterprises were blacklisted — on the phony pretext of protecting national security.

They're barred from purchasing US technology without Washington's permission, tech giant Huawei and its 70 affiliate companies most prominent on its so-called "entity list."

What continues under Biden aims to give corporate America a competitive advantage against China and other nations.

When G7 leaders meet in June, Biden's team reportedly will pressure Britain, France, Germany, Italy, Japan and Canada to contain China by excluding it from the global supply chain for semiconductors, communications, and other hi-tech products.

Phony accusations of forced labor, genocide and other alleged human rights abuses against Jinjiang Muslims is part of the US strategy.

Introduced in mid-April, the so-called (US) Strategic Competition Act of 2021 will impose more illegal sanctions on China and build closer relations with Taiwan.

It falsely accuses Beijing of committing human rights abuses and other abusive practices against Uyghur Muslims in Jinjiang.

No evidence supports the claims because none exists.

What's going on that aims to exclude China from the global supply chain flies in the face of economic cooperation with the country prioritized by European and other nations.

Relying heavily on access to its market, they oppose decoupling.

Its regional government invited hundreds of foreign diplomats, journalists, and others from over 100 countries to visit Jinjiang — to see positive developments firsthand.

"(S)o-called Western democratic values that the US plays as a lighthouse are merely an illusion," adding:

"Human rights have become a complete double-standard show of the US."

"Instead, the country is good at using this gimmick to divert public attention from its own poor human rights record onto affairs of other countries."

Bipartisan-supported US tech war on China began after Trump took office — in response to its 10-year Made in China 2025 blueprint for transforming the country from a "manufacturing giant into a world manufacturing power."

Seeking self-sufficiency to counter hostile US actions, Chinese President Xi Jinping in 2018 stressed the importance of Beijing "stick(ing) to the path of self-reliance amid rising unilateralism and protectionism in the present world."

All of the above and more apply to how Washington and its imperial partners operate worldwide — in stark contrast to China's pursuit of peace, stability and cooperative relations with other nations.

US war on China by other means risks turning hot.

The same applies to Russia if US hardliners push things beyond red lines of no return against both countries.