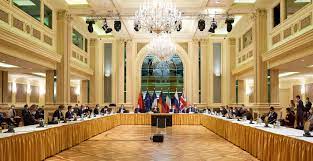 Hegemon USA can never be trusted.

When conducted, good faith diplomatic outreach to its ruling authorities achieves nothing binding.

US promises are consistently hollow, betrayal happening time and again.

For over 42 years, US policy toward Iran has been and continues to be all about eliminating its sovereignty by returning the country to client state status — by whatever it takes to achieve this aim.

Doing nothing to go another way, they continue relentless US war on Iran by other means.

Talks in Vienna to lift illegally imposed US sanctions and preserve the landmark JCPOA nuclear deal achieved nothing so far.

"(W)hen it comes to decision-making, (E 3 countries Britain, France and Germany) bow to the Americans and do not act independently."

Direct and indirect "(p)roposals by the Americans are arrogant and contemptuous. They are not worth looking at."

The same goes for their E 3 colonies.

"Once we are certain that has been done, we will carry out our commitments."

This is because (the US and its European colonies) have broken their promises tens of times, and it is the same now."

"We do not have any argument on this issue, but they should be careful that the sides do not drag their feet because that will be to the detriment of the country."

Indirect US involvement in Vienna talks are unrelated to good faith outreach to Iran.

Biden regime policy toward the Islamic Republic is all about wanting to impose its will on the country and people, Khamenei stressed.

Nothing by the US side suggests otherwise.

President Rouhani said Iran can enrich uranium to 90% purity — though it has no intention to develop nukes it abhors and wants eliminated everywhere.

On Wednesday, Iran's envoy to the international organizations in Vienna Kazem Gharibabadi said the Netanyahu regime "will…soon realize that they must never threaten Iranians."

"Nuclear terrorism at Natanz has unleashed dangerous spiral that can only be contained by ending US economic terrorism initiated by Trump.

Biden/Harris have a clear choice to make:

Either the Obama/Biden deal

No alternative. Not much time."

A longstanding state of undeclared US war on Iran by other means continues with no signs of easing.

According to Iraq's Saberin News, an attack by "unknown resistance forces" on Mossad's headquarters in the country's north killed 10 Israeli spies and wounded others, citing unidentified intelligence sources.

It's unknown whether what happened may be part of Iranian retaliation against Israeli sabotage of its Natanz nuclear facility.

"Iran has no credible civilian need for enrichment at this level (sic)."

Defying reality, he added that it raises questions about whether Tehran is serious about pursuing good faith talks in Vienna.

Unmentioned by Blinken and E 3 countries is that if they returned to JCPOA compliance as mandated by international law — that includes lifting all illegally imposed sanctions on Iran — legitimate steps taken by Iran since last year would be immediately reversed.

The US and E 3 have taken no good faith steps to fulfill their JCPOA obligations.

Their past and more recent actions show they can never be trusted.