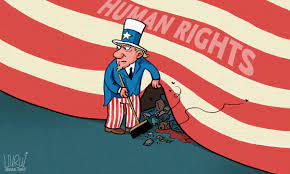 US history for centuries is pockmarked by the highest of high crimes of war, against humanity, and humanitarian disasters.

According to a China Society for Human Rights Studies (CSHRS) report on US criminality throughout the post-WW II period, Washington waged preemptive wars on invented enemies from North Korea in the early 1950s through endless aggression by hot and/or other means against dozens of nations worldwide.

The report titled "Severe Humanitarian Disasters Caused by US Aggressive Wars against Foreign Countries" explains what's well-known to analysts of Washington's dark past and present —though perhaps not in their ugly details.

From end of WW II to 2001, 248 military conflicts were waged worldwide — the US responsible for 201+ multiple post-9/11 wars by hot and/or other means against numerous countries.

US hot wars continue intermittently in dozens of countries.

According to analyst Nick Turse, the "US has more (active) military operations in Africa than in the Middle East."

Yet they're virtually unreported by official US sources or their press agent media.

Among other nations, the US is involved militarily in Niger, Kenya, Somalia, Tunisia, Mali, Nigeria, Cameroon, and Chad.

According to Turse, they're "kept as quiet as possible. Nobody talk(s) about" them.

The African continent is "the most active US military theater in the world."

In the most recent few years, the US "conducted more than 30 (military) operations and activities in Africa."

They're part of US global war OF terror, not on it.

The Pentagon has dozens of bases and outposts on the continent — supporting jihadist groups, using them as proxy foot soldiers.

According to the CSHRS report, decades of US preemptive wars devastated the lives and welfare of millions of people in many countries.

Besides millions killed in multiple theaters, an estimated 11 million Afghans became refugees from nearly two decades of US aggression.

In Yemen, hundreds of thousands are refugees. About 20 million Yemenis need humanitarian aid to survive.

After over a decade of US aggression in Syria, around six million refugees and millions more displaced require humanitarian aid.

Including a dozen years of genocidal sanctions, US orchestrated and waged aggression in Iraq has continued intermittently since 1980.

The US bears full responsibility for waging endless wars by hot and/or other means on numerous countries worldwide throughout most of the post-WW II period.

They include decades of US Cold War on Russia, continuing throughout post-9/11 years that currently risk turning hot along its border with Ukraine.

The CSHRS report stressed that hegemon USA is indifferent toward the rights and welfare of ordinary people worldwide, especially in nations it attacked militarily or by other means.

Centuries of US history are bloodstained — at home and worldwide.

No nation in world history has been more contemptuous toward human rights over a longer duration than hegemon USA.

At the same time, it falsely accuses China, Russia, Iran, and other invented enemies of human rights abuses, ignoring its own.

Its hypocrisy needs no elaboration,

For centuries, it's been responsible for devastating humanitarian catastrophes worldwide.

They remain ongoing in multiple theaters with no prospect for waging peace over forever wars on dozens of countries and their people worldwide.