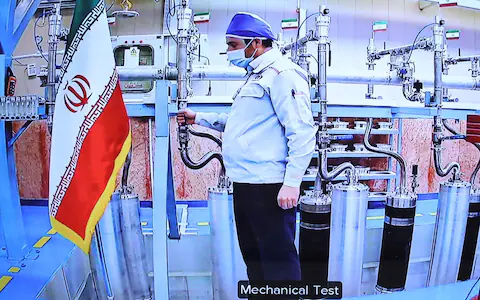 Power was temporarily cut off at the nuclear facility.

"(T)here was no human or environmental damage, but it could certainly have led to a catastrophe that is a crime against humanity, which is not uncommon in the thuggish nature of the Zionist regime," Khatibzadeh explained, adding:

IRI-type centrifuges rendered out of order by Israeli sabotage "are being replaced with advanced (IR6) centrifuges."

The latest incident came after two days of talks in Vienna last week between Iran, Russia, China and E 3 countries on the JCPOA and lifting of all illegally imposed US sanctions — so far achieving nothing.

Calling the Israeli attack on Natanz a "crime against humanity" — as well as "nuclear terrorism" — Khatibzadeh vowed "revenge…in due time and place," adding:

It's "too early" to estimate how much damage was done."

"More will be known after damaged centrifuges are replaced with advanced ones.

Khatibzadeh called for action by the "IAEA and other international authorities (to) do their job, not just condemn, but ensure that such things do not happen again."

"We do not base our path on the statements and actions of the Zionist regime."

"The Islamic Republic of Iran reserves its right to act against the perpetrators of this heinous move," adding:

"The move also indicates the failure of opponents of the Islamic Republic of Iran in recent nuclear talks for the lifting oppressive and cruel US sanctions imposed against the country."

"While condemning this heinous move, the Islamic Republic of Iran calls on the international community and the International Atomic Energy Agency (IAEA) to deal with perpetrators of this nuclear terrorism."

AEOI spokesman Behrouz Kamalvandi said what specifically caused the sabotage is being investigated — further information to be announced when more is known.

"The Zionists want to take revenge because of our progress in the way to lift sanctions."

"They have publicly said that they will not allow this. But we will take our revenge…"

"The Zionists will get their answer in further nuclear progress."

"Natanz will be stronger than ever with more advanced machines, and if they think our hand in negotiation is weak, this act will strengthen our position in the negotiations."

According to the Jerusalem Post, "Mossad was reportedly behind the cyberattack at Natanz on Sunday."

On Sunday's Natanz incident, he said Tehran can repair whatever damage was done to continue advancing its nuclear program, adding:

Electricity cut off by Sunday's cyberattack won't be serious if backup power systems are in place at Natanz.

If they were sabotaged, it could take a few months to repair damage.

"But if somebody really hit all 6,000 centrifuges — old and new — that's an extraordinary achievement" that most likely did not occur.

According to Israeli defense analyst Alon Ben-David, Biden regime "officials expressed satisfaction with the damage to the facility."

If accurately assessed, what's most likely, it's further evidence of the futility of expecting anything positive by Biden regime hardliners toward Iran ahead.

As explained earlier, chances of the US returning to the JCPOA in its original form and lifting all illegally imposed sanctions on Iran is virtually nil.

It's a waste of time dealing with its dominant hardliners directly or indirectly.

The can never be trusted — offering nothing but hollow promises to be broken.