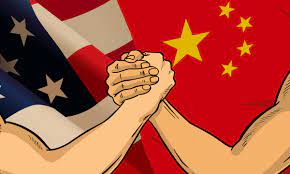 Congressional and Biden regime hardliners intend escalating war on China by other means more than already.

The Strategic Competition Act of 2021 will impose more illegal sanctions on China and build closer relations with Taiwan — what Beijing calls a breakaway province to be eventually reunited with the mainland.

According to Chinaphobe/neocon hardliner Menendez:

"(T)his unprecedented bipartisan effort to mobilize all US strategic, economic and diplomatic tools for an Indo-Pacific strategy that will allow our nation to truly confront the challenges China poses to our national and economic security (sic)."

The measure includes funding for greater disruptive — made-in-the-USA — attacks on China's soft underbelly in Hong Kong on the phony pretext of promoting democracy — a notion dominant US hardliners abhor and tolerate nowhere, especially not domestically.

The bill is part of Washington's futile strategy to weaken Beijing.

It also ups the stakes more than already for confrontation between both countries.

It calls for strengthening US military ties with Indo/Pacific nations, saying the following:

It calls "China's claims to offshore resources across most of the South China Sea…unlawful (sic)."

It ignores forever US wars by hot and other means on invented enemies worldwide, along with hostile occupations of many countries to control them.

The measure is part of advancing US hegemonic aims in the Indo/Pacific — including by increasing its military footprint in a part of the world not its own.

Wanting then preserved and advanced, they're highly unlikely relinquish what benefits them to a higher power in Washington.

Beijing is their largest and most significant trading partner, what's notably true for Japan, India and Australia.

Despite territorial disputes that are relatively minor by comparison, their relations with China are cooperative.

The country is the main engine of regional economic growth.

Regional countries benefit from stimulus provided by China, a nation that prioritizes cooperative relations free from confrontation like the US operates.

Most, perhaps all, Indo/Pacific countries know they have nothing to fear from China militarily or in other ways.

They reject the US-pushed notion of a Chinese threat that doesn't exist.

The new US measure — that's likely to pass overwhelmingly and be enacted into law this year — will eliminate longstanding restrictions on Washington's dealings with Taiwan, what surely will more greatly strain relations with Beijing.

The Senate Foreign Relations Committee will vote on the anti-China measure next week, what's sure to be agreed on, perhaps unanimously.