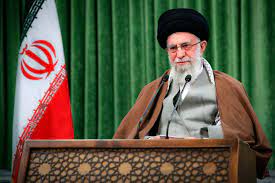 On Friday, Iranian Deputy Foreign Minister Abbas Araqchi — in charge of his nation's JCPOA talks in Vienna — said "almost nothing" was achieved so far.

The US abandoned the JCPOA, "and it has to fix it."

"They know what to do to repair this agreement," but haven't done it.

"After four years of relentless (political and) economic war by (the Trump regime) against the Iranian people, it is impossible for Iran to trust" US ruling authorities.

"We have made it clear that all sanctions that have been illegally imposed on Iran, re-imposed and re-labeled must be lifted at once."

"Iran must approve the lifting of sanctions. This is (its) very clear position."

They resemble an "iron fist in a velvet glove," he stressed.

Biden hardliners reject restoration of the JCPOA in its original form.

Pushing for new unacceptable demands, they intend to drag out talks endlessly in a futile attempt to wear down Iran to go along with what no responsible government would accept.

His remarks provided more evidence of the futility of good faith diplomatic outreach to the US.

Ignoring Trump's flagrant breach of international law by abandoning the JCPOA, he falsely accused Iran of noncompliance with the landmark agreement.

Time and again, nations like Iran are falsely accused of wrongful actions committed against them by hegemon USA and its imperial partners.

Iran justifiably will accept nothing less than removal of all illegally imposed sanctions.

According to the Biden regime official, it unacceptably reserves the the right to impose them and will not lift all Trump regime sanctions, adding:

"If Iran sticks to the position that every sanction that has been imposed since 2017 has to be lifted or there will be no deal, then we are heading towards an impasse."

Claiming some US sanctions are "legitimate" turned truth on its head.

According to the UN Charter and other international law, Security Council members alone may impose sanctions on members state — not individual nations on others.

Remarks by the unnamed senior Biden regime official showed that its geopolitical team has no intention of complying with international law in dealings with Iran or any other countries.

From day one after agreement on the JCPOA was reached, Iran has been and continues to be in full compliance with its provisions.

The same goes for their successors.

Throughout US history, its ruling authorities could never be trusted — time and again pledging one thing, then going another way.

The US repeatedly tramples on the rights of other nations and their people.

Every treaty agreed to by US authorities with Native Americans was systematically breached, no exceptions.

For hundreds of years from colonial America to the present, its history reflects broken promises, broken laws, broken treaties, broken hope for its native people, and similar betrayal of agreements with many other countries.

US ruling authorities continue to wage forever wars by hot and/or other means on nations free from their control — as well as on ordinary people at home and abroad.

Statements like "(t)he government of the United States desires peace, and its honor is hereby pledged to keep" its treaty obligations proved hollow every time.

The same is true about the Constitution's Article VI, stating:

Good faith, equity, justice, and compliance with the rule of law at home and abroad were never US attributes.

Today, a permanent state of declared and undeclared wars exist against nations unwilling to sell their soul to a higher power in Washington.

Since its liberating 1979 revolution, ending a generation of US-imposed fascist tyranny, a state of undeclared US war on the Islamic Republic has continued to the present day.

The same goes for all nations free from its control.

They know what they're up against because of US rage to transform them into pro-Western vassal states.

Whatever the outcome of Vienna talks, a state of undeclared war on Iran by the US will continue unchanged.

Virtually always, dealing with its ruling regimes — directly or indirectly — is an exercise in futility.

Whatever is agreed on is certain to fall victim to US duplicity.

It's a waste of time for Iran to continue Vienna talks because if anything is agreed on, US betrayal is certain near-or-longer-term.