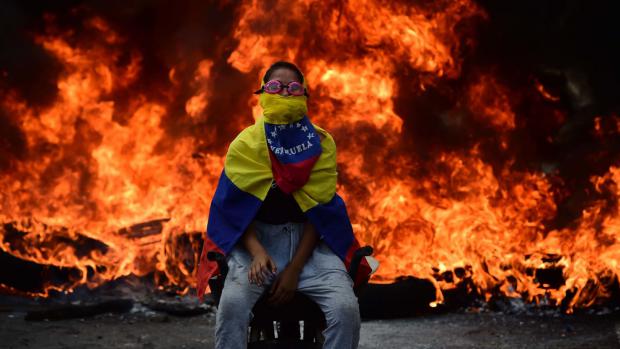 Since Bolivarian social democracy replaced fascist tyranny in 1999, US regimes from the Clintons to Biden/Harris have gone all-out to crush it short of hot war.

"(T)he overriding goal of the United States is to support the people of Venezuela (sic), and that includes the peaceful democratic transition in Venezuela (sic), as well as free and fair presidential elections (sic), and quite frankly, to rebuild the lives of their country (sic)."

US ruling regimes abhor democracy, banning it domestically, and wanting it eliminated wherever emerges worldwide — Bolivarian Venezuela a prime target.

US sanctions war on the country is all about wanting its economy crushed, its people suffocated into submission to Washington's will.

What's failed for over 20 years is highly unlikely to succeed ahead.

In February, a US Government and Accountability Office (GAO) report said sanctions imposed by US regimes on Venezuela created crisis economic conditions and obstructed delivery of humanitarian aid.

US "sanctions, particularly on the state oil company (PDVSA) in 2019, likely contributed to the steeper decline of the Venezuelan economy, primarily by limiting revenue from oil production," the report stressed.

Bush/Cheney launched US sanctions war on the country in 2006 for so-called non-cooperation in combatting international terrorism Washington created and supports.

War on the Bolivarian Republic by other means continued under Obama, greatly escalated by Trump regime hardliners.

They targeted numerous Venezuelan officials and the country's enterprises, attempting to block Bolivarian access to financial markets, along with aiming to reduce its oil sales to zero.

Annually since 2006, the State Department accused Venezuela of not "cooperating fully with United States anti-terrorism efforts (sic)" – pursuant to Section 40A of the Arms Export Control Act (22 USC 2781).

In 2005, the Bush/Cheney regime falsely accused the Bolivarian Republic of non-cooperation against narco-trafficking the US supports worldwide.

In March 2015, the Obama/Biden regime falsely declared Venezuela an "unusual and extraordinary threat to the national security and foreign policy of the United States."

It invented a phony "national emergency to confront" a nonexistent threat.

Trump regime hardliners escalated US war on Venezuela by other means — including illegal sanctions, propaganda, economic, financial, and electricity war.

Attacks were carried out on the country's infrastructure, aiming to inflict enormous harm on its ordinary people, falsely believing they'd blame Maduro for US criminal actions.

Biden regime hardliners continue what their predecessors launched on the country and its people.

What's imposed by the US are high crimes against humanity.

"(U)nilateral, illegal US sanctions are a form of collective punishment against the Venezuelan population and should be ended immediately."

"There is no reason to allow this crime…to continue — precisely what Biden regime hardliners are doing.

On Friday, the Biden regime blocked Venezuela's request for the World Trade Organization (WTO) to review and rule on illegal US sanctions that obstruct its international trade — on the phony pretext of claiming Maduro's government is illegitimate.

"The US will reject any effort by Maduro to misuse the WTO (sic) to attack (its) sanctions aimed at restoring human rights and democracy to Venezuela (sic)."

Like Trump, Biden and hardliners around him back overwhelmingly despised/usurper in waiting Guaido — a figure no longer a National Assembly member.

His widespread unpopularity ruled out any chance for reelection.

Even the EU dropped support for a figure with no legitimacy.

"Sooner rather than later Venezuela will defeat with the law what the United States seeks to impose with force."

Separately last Tuesday, the UN Human Rights Council adopted a resolution against use of sanctions as "tools of political and economic pressure" by a vote of 30 nations in favor, 15 opposed, and two abstentions.

China and Russia were on the right side of the issue in support of the UN Charter and other international law.

In response, Maduro called the resolution's adoption vindication of "the undeniable criminal damage" of unilateral sanctions "against the lives of Venezuelans and free nations of the world."

Criticism like the above falls on deaf ears in Washington and key EU capitals.

Their wars by hot and/or other means rage against nations free from imperial control with no end of them in prospect.