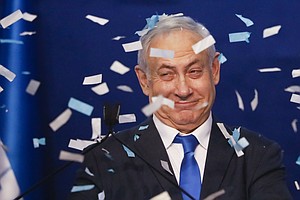 With most votes counted, Netanyahu lacks a 61-seat coalition majority.

One tally gives him 60 seats with coalition partners, another 59.

Here's where things stand. Netanyahu's Likud won 30 of 120 Knesset seats. Results for other parties were as follows:

Vote counting continues. On Wednesday and Thursday, it's being tallied for soldiers, hospital patients, nursing home residents, prisoners, and others unable to cast ballots at polling stations -- about 450,000 so-called double envelope ballots.

Yamina and UAL haven't indicated support for the pro-or-anti-Netanyahu bloc.

UAL leader Mansour Abbas said he's not "obligated to any bloc or candidate."

At this time, they're kingmakers. They have say over who''ll be Israeli prime minister.

Likud MK Tzachi Hanegbi said the party is willing to accept UAL as a coalition partner.

Is the Arab party willing to hand sworn enemy Netanyahu another term as prime minister?

In Jerusalem, votes for United Torah Judaism were greater than for other parties.

If a ruling coalition cannot be formed post-election, a 5th one in the past two years will be held.

With Yamina, their two seats short of a majority bloc.

Will UAL leader Mansour Abbas join the pro-Netanyahu bloc to put it over the top?

He collaborated with Netanyahu before to gain Arab community benefits that can be easily lost?

At this time, neither bloc won. Political jockeying is underway by both sides to enhance their positions.

Things could come to a head quickly or drag out for days.

He can swing the election either way.

On Wednesday, he said "(w)e want to use not only parliamentary tools, but cabinet tools to accomplish things for the benefit of Arab society."

While campaigning, Netanyahu ruled out an alliance with UAL, calling Abbas an anti-Zionist.