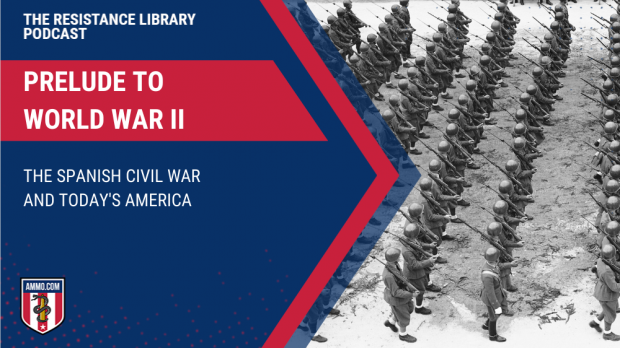 The Prelude to World War II: The Spanish Civil War and Today**Q**s America

On this week's episode of the Resistance Library Podcast Dave and Sam discuss what is considered by historians to be the prelude to World War II, the Spanish Civil War.

As we talk about the lead-up to the Spanish Civil War, the situation will begin very much unlike modern-day America, however, it will become more like the contemporary domestic situation as time goes on.

The main difference, of course, is that Spain was a monarchy for almost all of its existence until 1931. A republic was briefly declared during the years 1873 and 1874, but it didn't have much staying power and ultimately was not a transformative government in Spain. Following the First World War, the corrupt central government of Spain became increasingly unpopular and a military dictatorship, that of Miguel Primo de Rivera y Orbaneja, 2nd Marquess of Estella, 22nd Count of Sobremonte, arose. This fell in 1930, along with the abdication of the deeply unpopular King Alfonso XIII.

This led to the creation of the Second Spanish Republic and a new constitution in 1931. It was a radically leftist constitution in a largely conservative and Catholic country. Women's suffrage, civil marriage, compulsory universal education, the nationalization of Catholic Church properties, the prohibition of Catholic religious orders from teaching in schools (and the Jesuit order entirely), as well as a provision allowing for the nationalization of any property that was for the "public good" were all components of the new Spanish constitution. In many ways it resembled the constitution of Weimar Germany, in that it was an attempt by the left to radically remake a country through constitutional means.

The first election saw leftist elements firmly in the saddle, but the second, in 1933, was a major victory for forces of the right. However, because the conservative party had won a plurality in the parliament, and not a majority, the left-wing president of Spain invited the centrist party to form a government. Meanwhile the socialist government alleged electoral fraud, which caused them to become further radicalized. On the ground, a radical working-class movement became hostile toward the ostensibly left-wing government after the movement was suppressed violently by the military.

Monarchist forces, with the explicit backing of Benito Mussolini and the implicit backing of King Alfonso XIII, as well as ideologically fascist forces led by José Antonio Primo de Rivera, began military drills, preparing for war. The streets of Spain became battlegrounds, with 330 assassinations, 213 failed assassination attempts and 160 religious buildings destroyed, with arson being the primary means of their destruction. The Spanish Socialist Workers' Party, formerly a fairly standard European social democratic party, began to cleave between forces who favored moderation and those who sought a more explicitly Bolshevik party.

You can read the full article "The Prelude to World War II: The Spanish Civil War and Today's America" at Ammo.com.

And check out our sponsor, Libertas Bella, for all of your favorite Libertarianism shirts at LibertasBella.com.

The Prelude to World War II: The Spanish Civil War and Today's America

The Italian Years of Lead: Could the Secret "Strategy of Tension" Foreshadow America's Future?

It's back to the future for Rome's Colosseum: