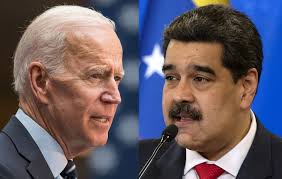 No End US Sanctions War on Venezuela under Biden

US sanctions wars are all about wanting economies of targeted countries crushed, their people suffocated into submission to Washington.

Around three dozen world community nations are targeted by the US this way.

Against Bolivarian Venezuela, their main goal is replacing its social democracy with US controlled fascist tyranny.

Whenever imposed, sanctions are based on Big Lies.

All of the above apply to Washington and its imperial partners, not Venezuela or other nations on the US target list for regime change.

The GAO report "offers more evidence that these unilateral, illegal US sanctions are a form of collective punishment against the Venezuelan population and should be ended immediately."

"There is no reason to allow this crime from the Trump administration to continue."

"We certainly don't expect any contact with Maduro anytime soon." -- even though he was and remains democratically elected and reelected president.

Blinken said Biden will escalate (unlawful) sanctions war on the country and its people.

Like others in Washington past and present, Price falsely called model democrat Maduro "a dictator (sic)."

US sanctions war bears full responsibility for humanitarian hardships in the country, including by US grand theft of billions of dollars of Venezuelan revenue and assets.

Following her visit to Venezuela this month, UN Special Rapporteur on the negative impact of unilateral coercive measures on the enjoyment of human rights, Alena Douha, reported on what she found.

Venezuelan officials facilitated her visit. They engaged with her in frank and open dialogue on conditions in the country.

Europe and Canada partnered with Trump's war on Venezuela by other means -- continued by Biden.

Douha stressed that multiple rounds of US sanctions breached

Article 4 of the International Covenant on Civil and Political Rights that states:

"In time of public emergency which threatens the life of the nation and the existence of which is officially proclaimed, the States Parties to the present Covenant may take measures derogating from their obligations under the present Covenant to the extent strictly required by the exigencies of the situation, provided that such measures are not inconsistent with their other obligations under international law and do not involve discrimination solely on the ground of race, color, sex, language, religion or social origin."

The UN Charter and other international law also prohibit nations from interfering in the internal affairs of other countries -- what US sanctions do against all invented enemies.

She condemned seizure of Venezuelan financial assets by US, UK, and other Western banks -- even for buying food, medicines, and other essentials to life.

These and other lawless actions constitute crimes against humanity, notably aiming to starve and otherwise suffocate Venezuelans into submission.

Nothing remotely justifies US war on Venezuela by other means.

It continues against ordinary Venezuelans with no prospect for ending it under Biden.

Douha stressed that unlawful US sanctions gravely harmed millions in the country.

Biden/Harris continue what Obama/Biden initiated, greatly escalated by Trump with no end of immiserating the Venezuelan people in prospect.