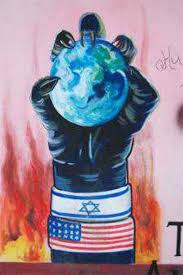 With rare exceptions, colonized EU bloc countries march in lockstep with Washington's geopolitical agenda — even at the expense of their own interests.

The US and Israel long ago agreed to challenge Iran's nonexistent aim to develop nuclear weapons.

A nonexistent Iranian threat was invented to unjustifiably justify US-led war on the country by other means.

Since taking office, Biden abandoned the idea of engaging with Iran diplomatically. Claims otherwise are fabricated — based on his actions since January 20.

No evidence suggests a change of what's going on.

Biden and hardliners around him invent reasons to continue endless US war on Iran by other means.

It's solely for its sovereign independence, its legitimate unwillingness to sacrifice its international law affirmed rights to US imperial interests.

Biden showed he's committed to continuing US forever wars by hot and other means against China, Russia, Iran, Venezuela, and other invented enemies.

No real ones existed since WW II ended.

He proved to Tehran that like Trump, he can never be trusted no matter what he or other regime officials say.

The US and E3 remain in noncompliance with their JCPOA obligations, not Iran.

Demanding that Tehran go along with their unacceptable demands wrecks the landmark agreement.

If they remain unbending that seems highly likely, the JCPOA will dissolve altogether — where things are heading.

During his Wednesday press briefing, Blinken spokesman Price continued his hostile to Iran drumbeat of Big Lies and mass deception like the following defiance of reality, saying:

"Iran distanced itself from several of these key constraints (sic). Its nuclear program has become more advanced (sic)."

"Its breakout time…to build a nuclear weapon (narrowed to a) handful of months (sic)."

No illicit Iranian nuclear program exists, no intent to develop nukes, no threats posed by the Islamic Republic to any countries.

"Angry at losing his dupe in the White House," he continues his war of words on Iran by proliferating Big Lies, what he's done for years.

"The IDF is currently working to build up our forces and is preparing itself for any scenario, including one in which we would need to take action to prevent Iran from obtaining nuclear weapons" it abhors, doesn't seek and wants eliminated everywhere.

Like Netanyahu and other Israeli officials, Gantz failed to mention that Israel is the region's only nuclear armed and dangerous state.

Nor do Israeli or US media raise the taboo issue — even though there's no ambiguity about Israel's open secret, including about its chemical, biological, and other banned weapons programs.

The US and EU must "end (Iran's nonexistent) nuclear project (and include) longterm effective oversight and inspection, (along with) put(ting) a stop to Iranian entrenchment in Syria, Yemen and Iraq (sic)."

No Iranian program exists to develop and produce nukes or other banned weapons.

No nations may legally interfere in the internal affairs of others.

All nations may engage with others diplomatically.

They may legally aid allies defend against foreign aggressors or other illegal interference in their internal affairs.

Unlike serial lawbreakers USA, the EU bloc and Israel, Iran respects and complies with its international obligations, according to the rule of law.

No matter how often the Big Lie is exposed and refuted, it refuses to die because US, EU, Israeli hardliners keep it alive to continue their hostile anti-Iran agenda.

There's no end to anti-Iran saber-rattling bluster and bluffs.

Israel wouldn't dare attack Iran without US permission and involvement.

If its territory is struck preemptively by a foreign aggressor, a stiff price will be paid.

The world community knows that Iran's legitimate nuclear program has no military component.

The Islamic Republic banned development of these weapons long ago.

Israel is a regional menace, the US and NATO global ones, not Iran.

According to an Axios report, the US and Israel established "a strategic working group on Iran" in 2009 after Obama/Biden met with Netanyahu.

On Monday, Netanyahu met with war minister Gantz, foreign affairs minister Ashkenazi, and other regime national security and intelligence official to discuss engagement with their US counterparts on confronting a nonexistent Iranian threat.

Hardline US policy toward Iran shows no signs of softening.

If this policy continues in the coming weeks and months — what seems most likely — a window of opportunity for Biden to engage with Iran responsibly will be lost.