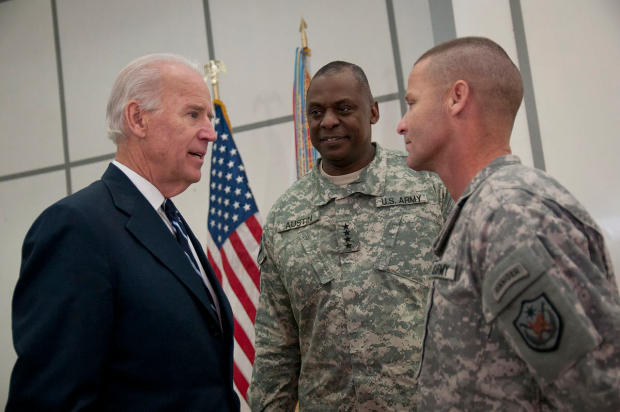 US generals and admirals aren't doves.

They earn stars and medals by waging preemptive wars to advance the nation's imperial aims.

Throughout the post-WW II period — from North Korea in the early 1950s to the present day — US wars have always been against invented enemies.

The common thread behind attacking them is for being unwilling to subordinate their sovereign rights to US interests.

He requires a congressional waiver to serve in the post because of his recent military service, likely to be gotten.

If confirmed as expected, he'll be the third former US military official to serve as war secretary — George Marshall and James ("mad dog") Mattis the other two.

Austin will be the first African American to serve in the post.

He's a global war OF terror veteran, in charge of US aggression in Afghanistan and Iraq — nonbelligerent countries threatening no one, invented enemies, not the real thing.

The American Academy of Diplomacy described him as follows:

"In this capacity, he was responsible for military strategy and joint operations throughout the Middle East and Central and South Asia."

"He also served as the Combined Forces Commander, overseeing the military campaign to defeat the terrorist organization, ISIL in Iraq and Syria (sic)."

ISIL (aka ISIS, the Islamic State) was made-in-the USA to serve as Pentagon proxy fighters in Iraq, Syria, Afghanistan, and elsewhere.

The same goes for al-Qaeda, its al-Nusra spinoff, and likeminded terrorist groups.

Like other Pentagon commanders, Austin deployed ISIS fighters to areas in US war theaters to combat their defense forces and civilians.

He didn't defeat them. He used them to advance US imperial interests.

He currently heads the Austin Strategy Group, along with serving as a board member of United Technologies, NUCOR Steel, and Tenet Health Care.

When Obama withdrew US forces from Iraq in December 2011 (a temporary move as things turned out), Austin defied reality with the following remarks:

"What our troops achieved in Iraq over the course of nearly nine years is truly remarkable (sic)."

"Together with our coalition partners and corps of dedicated civilians, they removed a brutal dictator and gave the Iraqi people their freedom (sic)."

From GHW Bush's preemptive 1991 Gulf War — to over a dozen years of genocidal US/Western sanctions — to Bush/Cheney's 2003 aggression — to Trump's rape and destruction of Mosul…millions of Iraqis were liberated from their lives.

Millions more lost access to near-universal healthcare and one of the region's best educational systems to the highest levels — provided free to Iraqis by Saddam Hussein.

He ruled despotically but wasn't all bad.

What Austin, Trump's first war secretary Mattis, and other US commanders did to Iraq over the past 30 years was and continues to be one of history's great crimes.

Similar ones were — and are still — committed against numerous other countries, by hot war and other means.

US generals like Austin are charged with transforming sovereign nations into US vassal states by brute force and other hostile tactics.

When likely confirmed as Biden/Harris war secretary, Austin will be charged with directing all US hot wars and foreign occupations.

His mission will be to smash targeted countries into compliance with Washington's interests and control them.