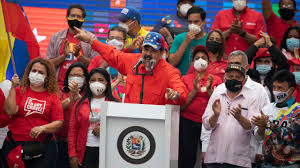 An unprecedented total of 14,400 candidates from 107 political parties ran for office.

Two Bolivarian blocs were heavy favorites to win a majority of seats — the ruling United Socialist Party (PSUV) and PPT Homeland for All Party/together with the Communist Party of Venezuela (PCV).

For the first time, the Popular Revolutionary Alternative (APR) competed for seats.

The PPT Homeland for All Party called APR "a historic necessity which has come out of the coming together of all of us who struggle to defend the victories of the revolution."

The above parties support Bolivarian social democracy, wanting it preserved.

US-designated puppet/usurper in waiting Guaido and many opposition parties boycotted Sunday's process because of no chance to win a controlling majority.

On January 5, his time in office ends when polls show his support is a rock-bottom 3%.

Bolivarian social democracy is the world's gold standard of how governments should operate — serving all Venezuelans, not just the privileged few as in the US, West and most other countries.

US war by other means on Venezuela since Hugo Chavez's December 1998 election continues without letup.

Harsh Trump regime policies imposed on the country exceeded the worst of its predecessors since the Clinton co-presidency.

Much of the same will surely continue under Biden/Harris — how the US punishes all nations unwilling to subordinate their sovereign rights to a higher power in Washington.

Unlike elections in the US and West, Venezuela's process is open, free, and fair, international monitors observing things.

Representatives from the UN, CARICOM, African Union, Council of Latin American Electoral Experts (CEELA), Russia, Iran, and other countries were in Venezuela on Sunday.

In deference to US imperial interests, the EU rejected an invitation to send monitors.

The Trump regime, Biden/Harris, and Brussels only recognize governments that are subservient to Western interests — at the expense of their own people, targeting independent ones for regime change.

The US and other Western countries called the results fraudulent (sic) — because Bolivarianism triumphed overwhelmingly over fascist dark forces.

In a nationally televised address at 1:45 AM local time, Maduro said "(w)e have recovered the National Assembly with the majority vote of the Venezuelan people."

"It's a great victory without a doubt for democracy."

"Starting today, a new era is born in Venezuela, and we are giving ourselves the opportunity to start a truly democratic process for the recovery of our beloved homeland."

"I call on all the opposition to abandon the extremist route."

"We ask in one voice for the new United States government to lift all sanctions."

"We restore all national dialogue mechanisms and are preparing an electoral agenda."

In response to Sunday's process, Pompeo reacted as expected.

Turning truth on its head, he tweeted the following:

"The results announced by the illegitimate Maduro regime will not reflect the will of the Venezuelan people (sic)."

"What's happening today is a fraud and a sham, not an election (sic)."

The above remarks reflect reality about US fantasy democracy.

Venezuelans have the real thing.