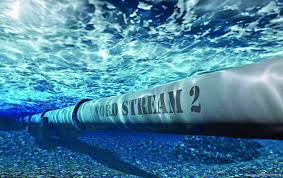 Russia's Nord Stream 2 gas pipeline to Germany will be completed and become operational in early 2021.

"One of the ships that can be used to finalize it is now in the Far East. Some time will be required for extra preparations."

Earlier after the Swiss-based pipe-laying firm Allseas pulled out of the project in response to threatened US sanctions, Novak said Russia is able to complete pipeline construction on its own — without help from foreign contractors.

At the time, Pompeo falsely claimed the project and Turkstream gas pipeline "strengthen Russia's ability to use its energy resources to coerce our European partners and allies (sic)," adding:

"The projects would hinder the process of European energy diversification (sic)."

"These projects could also severely limit gas transit through Ukraine, depriving the Ukrainian government of significant transit revenues and reducing a large deterrent against further Russian aggression against Ukraine (sic)."

The US National Defense Authorization Act for FY 2020 included sanctions on enterprises involved in Nord Stream 2.

Unlawful US actions slowed but failed to halt work on the project.

The above and related remarks are code language for pressuring Europe to buy high-cost US NLG over 30% cheaper and readily available Russian gas via Nord Stream 1 and 2.

PEESA calls for vessels involved in Nord Stream 2 to "immediately cease construction-related activity…wind(ing) down" their operations.

The US diktat applies to "involved parties that have knowingly sold, leased, or provided vessels that are engaged in pipe laying at depths of 100 feet or more below sea level for the construction of Nord Stream 2."

Parties not complying with the US diktat face sanctions as explained in PEESA.

It targeted enterprises that "provid(e) services or facilities for upgrades or installation of equipment for" vessels involved in the project.

They also target companies that provide "funding for upgrades or installation of equipment for those vessels."

In response to the above announcement, Putin spokesman Dmitry Peskov said the following:

"(T)his is…an unfriendly and destructive policy of constant introduction of different restrictions against us, our economic operators and our economy."

"(T)his this has already become an integrant part of of the unfair competition, Washington's overt raider competition policy."

Along with countless other hostile US actions, many in flagrant breach of international law, US hardliners "have been pursuing this destructive policy (against Nord Stream 2) for over a year, and it certainly damages our bilateral relations."

The August Navalny novichok poisoning hoax was either part of the diabolical plot to undermine Nord Stream 2's completion or the Trump regime is using his illness for this purpose.

Construction on the project continues. Germany's support for its completion is key.

It's not it but "when this will happen. We make decisions about our energy policy and energy supply here — in Europe."

As things now stand, the project will be completed and begin delivering Russian gas to Germany and other European countries early in the new year.