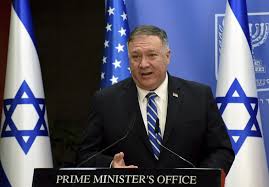 The above is how China's official People's Daily broadsheet described him last month.

A mouth that roars against all nations not controlled by the US, China and Iran top his target list. The People's Daily slammed his malicious Big Lies.

Even some establishment media call him the worst ever US secretary of state, an office he politicized in pursuing his political interests.

Diao believes if Biden defeats Trump in November, "(t)here is no proper position for him in the Republican Party."

Even if DJT gets a second term, he'll unlikely stay on in his current capacity.

Brookings senior fellow Thomas Wright called his over-the-top hostility toward China "surreal" — the same true about his anti-Iran viciousness, crossing the line against both countries to all-out vindictiveness.

He's as diplomatic as a common street thug.

According to the Albany Times Union, since becoming Trump's chief "diplomat" in March 2018, he's done enormous "damage to the world reputation and alliances of the United States."

On all things geopolitical, he manipulates Trump to do his bidding.

In August 2019, New Yorker columnist Susan Glasser called him the "Secretary of Trump."

Yet as a GOP congressman, he was a Trump skeptic, once calling him a "kook," a "cancer," his campaign a "circus."

Once elected president, Pompeo jumped at a chance to be CIA director, shifting to State after Trump and Rex Tillerson parted company.

Once antagonistic toward Trump, Pompeo became a loyal regime soldier who pulls the strings on geopolitical policies.

At the same time, he's one of the "most sycophantic and obsequious people around Trump," said Glasser, quoting a former regime official, adding:

A former US envoy told her: "He's like a heat-seeking missile for Trump's ass."

He's closest to him on all geopolitical issues, Glasser noting that their "born in derision" relationship was "remade in flattery (and) proved to be surprisingly durable."

In three congressional terms, "he never chaired a subcommittee or faced a genuinely competitive election…"

He spent much of his public life "running a struggling Wichita (Kansas) aviation company," Thayer Aerospace.

According to the Wichita Eagle, he was forced out of the company for mismanaging it into financial trouble.

In the House, he was known as the "congressman from Koch."

In public remarks on Wednesday, he focused heavily on China-bashing.

He lied saying Beijing authorities "oppress(ed), suppressed…censored, (and) disappeared (anyone) who tried to sound the alarm all across the world."

He lied accusing China of "intentionally misl(eading) the world on" COVID-19.

He lied saying if "approached by a Chinese diplomat, it is likely not in the spirit of cooperation or friendship."

He lied claiming Beijing "wants to foment the kind of strife we've seen in Minneapolis and Portland and Kenosha."

He lied saying its ruling authorities "interfere in our domestic politics."

He lied claiming the US is successful "because of its moral standards."

"We want to make sure we protect our children from the CCP's malign influence," he roared.

His presidential ambitions pose a potentially greater threat to humanity than in his current post.

His pure evil agenda is what the worst of imperial arrogance and destructiveness are all about.