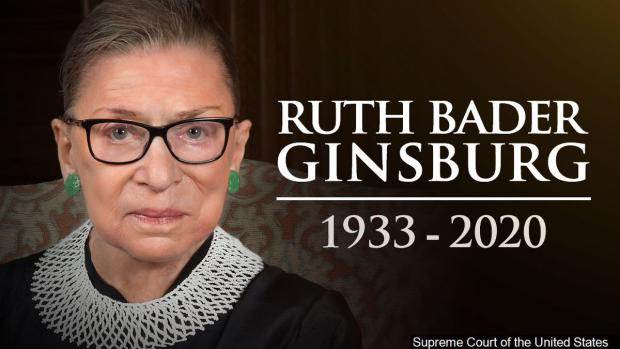 "Our aation has lost a jurist of historic stature" — one of only four women appointed to the High Court, Sandra Day O'Conner (Ret.), Sonia Sotomayor, and Elena Kagan the others.

"(F)uture generations will remember Ruth Bader Ginsburg as we knew her — a tireless and resolute champion of justice," Roberts added.

Earlier, he praised her "work ethic, intellectual rigor, precision with words and total disregard for the normal day-night work schedule adhered to by everyone else since the beginning of recorded history."

Complications from pancreatic cancer took her at age-87. In 1999, she was diagnosed and treated for colon cancer.

Nearly a decade later, she underwent surgery to remove a pancreatic cancer tumor.

Despite deteriorating health for years, she vowed to stay on the High Court as long as physically and intellectually able to perform her duties.

Known by her initials RBG, she was appointed to the federal bench by Jimmy Carter in 1981, later to the High Court by Bill Clinton in 1993 — at the time, only the second woman in US history chosen as a Supreme Court justice.

After graduating first in her class at Cornell and at Columbia Law School, she became a Professor of Law at Rutgers Law School where she taught civil procedure, complex issues her favorites to write about and teach.

She was a volunteer ACLU attorney and member of its board in the 1970s.

"Few individuals have had such a dramatic and lasting effect on a particular area of law as Supreme Court Justice Ruth Bader Ginsburg, who directed the work of the ACLU Women's Rights Project from its founding in 1972 until her appointment to the federal bench in 1980," adding:

"During the 1970s, Ginsburg led the ACLU in a host of important legal battles, many before the Supreme Court, that established the foundation for the current legal prohibitions against sex discrimination in this country and helped lay the groundwork for future women's rights advocacy."

"In her honor we will be dedicating the ACLU Center for Liberty as the Ruth Bader Ginsburg Liberty Center."

"She leaves a country changed because of her life's work."

An era passes with her loss. Mild-mannered in nature, admirers praised her resolute support for progressive issues, notably championing gender equity and constitutional protections for all.

She once said that "(a)nger, resentment (and) envy…are emotions that just sap your energy."

She attributed her successes in advocating for equity and justice by acting "in a way that will lead others to join you."

She favored going for incremental social change over trying to do too much, too fast, believing the latter approach encourages strong opposition.

Throughout her High Court tenure, she was always part of a liberal minority that limited what she was able to achieve judicially.

Because his son was enrolled at VMI at the time, Justice Thomas recused himself.

Writing for the majority, Ginsburg argued that VMI failed to show "exceedingly persuasive justification" for gender-based admissions — a policy in breach of the 14th Amendment's Equal Protection Clause.

In response to the state of Virginia's claim that "males tend to need an atmosphere of adversativeness" that VMI offered, while "females tend to thrive in a cooperative atmosphere," Ginsburg stressed that nothing in the Constitution supports this argument, adding:

US states "may not exclude qualified individuals based on 'fixed notions concerning the roles and abilities of males and females.' "

Throughout her academic and judicial career, she championed the notion of judging everyone as individuals, not according to stereotypes.

In Olmstead v. LC (1999), a case regarding discrimination of people with mental disabilities, an issue covered by the Americans with Disabilities Act (ADA), the Court ruled against "unjustified isolation" of persons with disabilities, calling this action a form of discrimination under ADA's Title II.

Siding with the majority, Ginsburg argued that "(i)nstitutional placement of persons who can handle and benefit from community settings perpetuates unwarranted assumptions that persons so isolated are incapable or unworthy of participating in community life."

Her most important High Court accomplishments came from convincing conservative justices that gender inequality hurts them.

She championed the notion that government and the courts "must not rely on overbroad generalizations about the different talents, capacities, or preferences of males and females" in legislation or ruling on it.

One of her notable dissents was in Shelby County (Alabama) v. (Eric) Holder (2013) on the constitutionality of two 1965 Voting Rights Act provisions that required states and local governments with a history of racial discrimination to obtain federal pre-clearance before changing voting laws and procedures.

Dissenting in the 5 - 4 ruling, Ginsburg argued that racial voter suppression declined because of the Voting Rights Act, not because the country changed since the 1960s as Justice Roberts claimed in writing for the majority, saying the law is no longer needed.

Ginsburg responded, saying "(t)hrowing out preclearance when it has worked and is continuing to work to stop discriminatory changes is like throwing away your umbrella in a rainstorm because you are not getting wet."

Growing up in a working-class Brooklyn neighborhood, Ginsburg called her mother Cecelia a major influence in her life, teaching her the value of independence and education.

She once quoted another gender equity advocate, saying:

"All I ask of our brethren is that they take their feet off our necks."

In a male dominated society from inception, Ginsburg championed equity and justice throughout her professional life.

Since 1999, she underwent cancer treatments four times — for her colon, pancreas, liver and lung.

In May, she participated in High Court oral argument from a hospital bed during treatment for a tumor on her pancreas.

In January, Ginsburg said she was cancer-free. Eight months later, she died.

In 2017, Ginsburg said "(w)e're  not experiencing the best of times," expressing "hope that we will see a better day," adding:

"A great man once said that the true symbol of the United States is not the bald eagle."

"It is the pendulum, and when (it) swings too far in one direction, it will go back."

"Some terrible things have happened in the United States, but one can only hope that we learn from those bad things" and turn things around.

At the time, she hoped to "have a way to go" on the bench.

Though gone, her judicial legacy remains an important part of the High Court's historical record.

Facing east is the motto "Justice, the Guardian of Liberty."

Since the Court's 1789 establishment, Ginsburg was one of its notable justices to uphold principles it claimed to stand for in a nation largely serving privileged interests over the general welfare throughout its history.