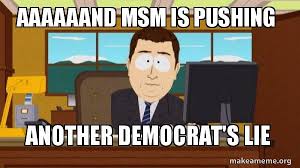 They consistently lie and otherwise deceive followers of their fake news rubbish.

On September 13, Politico falsely claimed that Iran is "weighing an assassination attempt against the American ambassador to South Africa (sic)."

"The Iranian embassy in Pretoria is involved in the plot (sic)."

No evidence was cited because none exists. The phony claim was a likely pre-US November presidential election stunt to make Trump look tough on Iran.

In response to the fake news report, Trump tweeted the following:

"According to press reports, Iran may be planning an assassination, or another attack, against the United States in retaliation for the killing of terrorist leader Soleimani (sic), which was carried out for his planning a future attack, murdering US Troops (sic), and the death & suffering caused over so many years (sic)," adding:

"Any attack by Iran, in any form, against the United States will be met with an attack on Iran that will be 1,000 times greater in magnitude (sic)!"

General Soleimani was a redoubtable anti-terrorism freedom fighter, greatly respected by Iranians and others regionally.

At the time of his cold-blooded murder by imperial USA based on Big Lies, Iranian Foreign Minister Zarif called him "THE most effective force fighting Daesh (ISIS), Al Nusrah, Al Qaeda et al…"

Iranian President Rouhani called him "an international figure of the resistance" — murdered by the Trump regime because of his effectiveness in combatting US-supported ISIS and likeminded jihadists.

Killing him was an act of US state-sponsored terrorism, a flagrant breach of international and US constitutional law.

Claiming jus ad bellum justification, the notion of conditions under which it's permissible to attack another country, is a nonstarter, a bald-faced Big Lie fooling no one.

"(W)e advise the United States' officials to stop resorting to repeated and decayed methods to create anti-Iran commotion at the international arena."

The Trump "regime's resorting to…spreading lies against Iran (ahead of the US) presidential election (along with) with pressures that this regime is applying to exploit the United Nations Security Council's mechanisms with the purpose of increasing pressure on the Iranian people was predictable."

Pompeo turned truth on its head like countless times before, falsely accusing Iran of "assassination efforts all across the world" — a longstanding CIA/Israeli Mossad speciality, not how Tehran operates anywhere.

Time and again, the US makes "ridiculous accusations" against Iran. "The only thing left for the United States to accuse (its ruling authorities) of is global warming."

Marandi compared the false accusation to US fake news about Saddam Hussain's nonexistent WMDs as a phony pretext to rape and destroy Iraq.

The same goes for its ruling authorities and most congressional members from both right wings of the one-party state.

US preemptive wars are based on similar "falsified comments…a (longstanding US) tradition."

If the US attacks Iran for any fake news reason, a tough "appropriate response" will follow, Rabiee warned.

In the run-up to US presidential and congressional elections, politicians in Washington and aspiring ones at times display toughness against invented US enemies.

Like Russia since its 1917 revolution and China more recently, Iran is bashed by US officials for not surrendering its sovereign independence to Washington's ruling class — not for any threat the country poses because there is none.

Ahead of November elections in an effort to look tough, will he attack Iran or another nonbelligerent country threatening no one as a stunt to win votes?