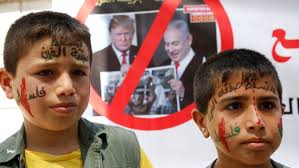 An agreement to normalize Israeli/UAE relations furthers longstanding Jewish state regional aims. More on this below.

Hamas spokesman Hazem Qassem slammed what does nothing to "serve the Palestinian cause," adding:

"The agreement with the UAE is a reward for the Israeli occupation and crimes."

"Normalization is a stab in the back of the Palestinian cause and it serves only the Israeli occupation," said Hamas' Fawzi Barhoum.

A Palestinian Authority (PA) statement expressed "strong rejection and condemnation" of the deal.

According to Lebanon's al-Mayadeen television, PA envoy to the UAE was recalled.

The agreement has nothing to do with preventing unlawful annexation of historic Palestinian West Bank land, suspending what's planned alone for a later time — while displacement of Palestinians from their land continues unabated.

On Thursday, Netanyahu stressed that annexation is "still on the table," what his regime is "committed to."

"Until Israel is no longer oppressing Palestinians and violating their rights, building illegal settlements, maintaining an apartheid regime, and attacking human rights defenders, Trump and Netanyahu's latest ploy, aided and abetted by the UAE, is nothing more than theatrics."

The IfNotNow movement of "Jews to end Israel's occupation and transform the American Jewish community" said the following in denouncing the Israel/UAE deal:

"After months of mounting pressure against Prime Minister Netanyahu's annexation plans from around the world, this treaty — recognizing the informal ties that have existed between Israel and the UAE for years — gives Netanyahu diplomatic cover to say that he stopped formal annexation of the West Bank," adding:

"Meanwhile, the (Netanyahu regime) can continue doing exactly what it has already been doing for decades — removing Palestinians from their land and stripping them of their rights."

"Once again, Palestinians, who are not mentioned in this document, are treated as political pawns and excluded from decision-making about their own future."

"During a call with…Trump and…Netanyahu, an agreement was reached to stop further Israeli annexation of Palestinian territories (sic)."

"The UAE and Israel also agreed to cooperation and setting a roadmap towards establishing a bilateral relationship."

What unofficially existed for some time is now officially established, including formal diplomatic relations — embassies to be set up and envoys announced.

A joint Israeli/UAE statement falsely claimed their agreement "advance(s) peace in the Middle East (sic)" — polar opposite reality on the ground.

"The UAE has come out in the open on its secret dealings/normalization with Israel."

"Please don't do us a favor. We are nobody's fig leaf!"

"May you never experience the agony of having your country stolen."

"May you never feel the pain of living in captivity under occupation."

"May you never witness the demolition of your home or murder of your loved ones."

"May you never be sold out by your 'friends.' "

"(T)he blood shed unjustly during seven decades of resistance for the liberation of the holy Palestinian territory and the first qibla of Muslims (qibla is the direction Muslims face when praying) will haunt those betraying the cause of Palestine sooner or later," adding:

"The Islamic Republic of Iran considers Abu Dhabi's shameful move to normalize relations with the fake, illegitimate and anti-humane Zionist regime as a dangerous measure, warns against any interference from the Zionist regime in the Persian Gulf region's equations, and declares that the Emirati government and the other governments siding with it must accept responsibility for all of the consequences of this move."

Clearly, the deal with the UAE has everything to do with advancing Israeli interests at the expense of regional peace, stability, and the rights of millions of long-suffering Arab people.

Asked by Iran's Press TV to comment on the agreement, I said the following:

Longstanding US/Israeli plans call for redrawing the Middle East by replacing regional governments with pro-Western puppet regimes they control — including their resources and populations.

In 1982, senior advisor to Israel's Ministry of Foreign Affairs Oded Yinon published a document for regional conquest and dominance — titled "A Strategy for Israel in the 1980s."

It's considered the most explicit, detailed statement of Zionist rage for redrawing the Middle East map to serve Israeli interests.

Its two essential premises include the following:

To survive, Israel must dominate the region and become a world power.

According to Yinon, "(t)he existence, prosperity and steadfastness of (Israel) depend(s) upon its ability to adopt a new framework for its domestic and foreign affairs," based on securing its material needs through winnable resource wars and Arab world divisions.

"All the Arab States east of Israel are torn apart, broken up and riddled with inner conflicts even more than those of the Maghreb" (Morocco, Algeria, Tunisia, Libya, Mauritania, and Western Sahara)."

Gulf states are "built upon a delicate house of sand in which there is only oil." Jordan is in reality Palestine, Amman the same as Nablus.

Other regional states are similar, including Egypt, Iran, Turkey, Afghanistan, Pakistan, and others.

The US, NATO, Israeli scheme is all about creating endless regional violence and chaos, exploited to their advantage for gaining control over regional nations and their valued resources.

Israel's slongstanding plan in cahoots with the US represents what the scourge of imperialism is all about — pursuing their aims by brute force, the human cost of no consequence.

Israel's 1967 Golan seizure, as well as 1978 and 1982 Lebanon invasions followed the diabolical plan.

So does its undeclared war on Syria with designs of annexing more of its territory, balkanizing the rest.

According to Shahak, "Israel's  plan follows faithfully the geopolitical ideas current in Germany of 1890 – 1933, which were swallowed whole by Hitler and the Nazi movement, and determined their aims for East Europe."

They were then implemented from 1939 – 1941, "and only (a global alliance) prevented their consolidation for a period of time."

Yinon believed that "(t)he existence, prosperity and steadfastness of (Israel) depend(s) upon its ability to adopt a new framework for its domestic and foreign affairs," based on securing its material needs through winnable resource wars and Arab world divisions.

Throughout the Middle East, hunger, unemployment, and deprivation affect millions.

They're potentially explosive problems only security forces can contain, giving Israel "far-reaching opportunities for the first time since 1967."

"The Arabs must make room for the Jews in Eretz Israel." With US help, the Jewish state can pursue its expansionary aims.

On Thursday in Washington, Trump announced the Israeli/ UAE deal.

It's the third Arab state to establish diplomatic relations with Israel — Egypt and Jordan the others.

Both countries have no formal relations. Extensive behind-the-scenes diplomatic, economic, intelligence, and military ties were established to pursue mutual interests.

Regular meetings are held between officials of both countries in their capitals, Jordan and the US. Strategic relations have been developing for years.

The kingdom is allied with the Trump and Netanyahu regimes against Iran, Syria, Hezbollah, Hamas, and fundamental Palestinian rights.

The Saudis were heavily involved in selling the Trump regime's no-peace/deal of the century to the Palestinian leadership.

It was and remains a diabolical scheme for formalizing Palestinian subjugation to Israeli interests, including abandonment of self-determination. It was dead before arrival.

Ruling regimes in both countries support ISIS and likeminded jihadists.

The same goes for the UAE. An alliance with Israel advances the Jewish state's aim for regional dominance at the expense of the Arab world and Iran if able to achieve its longterm objectives that are hostile to what just societies cherish.