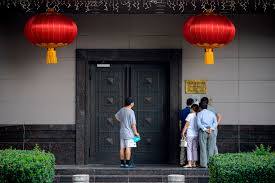 The reverse of the one good deed deserves another maxim applies.

As expected, China responded to the unacceptable Trump regime's ordered closure of its Houston consulate effective Friday by ordering the shut down of Washington's Chengdu consulate.

Despite the Trump regime's ordered closure, the facility will remain open "until further notice," he said, adding:

"Today we are still operating normally, so we will see what will happen tomorrow."

"We prepared for the worst scenario but we've also launched a strong protest."

"So we urge the US to abandon and revoke that wrong decision."

Cai declined to say what actions he may take past the Trump regime's ordered deadline for the consulate he heads to shut down and cease operating.

He'll act according to what his superiors in Beijing order.

Are Sino/US negotiations ongoing to try resolving this issue?

It's highly unlikely that the Trump regime would reverse its order without a major Beijing concession to one or more of its unacceptable demands.

Things appear stalemated on this and other major issues related to bilateral relations.

Most likely, Cai and other consulate staff will leave the facility Friday, perhaps at the 11th hour.

If Beijing tells him to stay, will Trump regime federal agents invade the Houston consulate, forcibly arrest him and others inside — either detaining or deporting them?

There's no precedent in the US for such a scenario unfolding. While it's highly unlikely to occur, Trump regime relations with

China are so close to rupturing that almost anything could happen ahead.

Cai slammed Pompeo's hostile remarks, stressing that the consulate he heads strictly complies with the 1961 Vienna Convention on Diplomatic Relations.

"The measure taken by China is a legitimate and necessary response to the unjustified act by the US," adding:

"The current situation in China-US relations is not what China desires to see, and the US is responsible for all this."

"We once again urge the US to immediately retract its wrong decision and create necessary conditions for bringing the bilateral relationship back on track."

The US Chengdu consulate overseas its so-called "diplomatic mission" in China's southwest — including Tibet, Chongqing, Sichuan, Yunnan and Guizhou.

Its activities are less wide-ranging than US consulates in Shanghai and Guangdong province — China's response proportionate to the ordered closure of its Houston consulate.

Anti-China actions taken by Trump relate both to deteriorating Sino/US relations and his focus on reelection.

Trump's ordered closure of China's Houston consulate in part aims to boost support in Texas for his flagging campaign.

Along with the Middle East, the South China Sea is a major hot spot.

"If there is a little scuffle in the South China Sea, it could soon escalate."

"And if (Washington and Beijing) failed to control it, it could be devastating and everybody would lose."

The order "constitutes a brazen provocation, and an unprecedented escalation in its scheme to sabotage bilateral relations…(an) outrageous and unjustified" action.

"(T)he demand to close the Consulate General in Houston is just the tip of the iceberg of the White House's ever-expanding anti-China campaign."

Sino/US relations continue deteriorating. They're at their lowest ebb since formal diplomatic ties were established over 40 years ago.

The risk of things escalating to belligerent confrontation is ominously real.

As the saying goes, the ball is in the US court. China wants cooperative relations with the world community of nations.

Hardliners running both right wings of the US war party are hellbent for unchallenged global dominance.

China and Russia are the only nations powerful enough militarily to challenge Washington's diabolical aims.

US war by other means rages against both countries.

The harder Washington pushes, the greater the danger of unthinkable war between nations with weapons powerful enough to destroy planet earth and all its life forms if unleashed in enough numbers.

"If the China-hardliners in Washington continue with their bullying tactics, they should prepare for legitimate and forceful countermeasures from Beijing, as it defends its national interests."