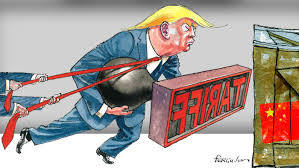 Houston, We Have a (Hostile to China Trump Regime) Problem

Pompeo et al are hostile to world peace, stability, democratic values, and respect for the rule of law — operating by their own rules exclusively, making them up in pursuit of their aim to control other nations, their resources and populations.

It's a prescription for endless wars by hot and other means on invented enemies. No real ones existed since WW II ended — 75 years ago.

What should have led to a new era of world peace and cooperative relations with other countries was prelude to endless wars that followed — raging by the US today in multiple theaters by hot and other means.

The Pentagon has carte blanche to spend countless trillions of dollars on militarism, its global empire of bases, and endless wars of aggression on nations threatening no one.

Albert Einstein long ago warned that the "power of the atom has changed everything save our modes of thinking, and we thus drift toward unparalleled catastrophe."

He also said "(t)wo things are infinite — the universe and human stupidity."

George Santayana and others stressed that failure to learn from history's mistakes assures repeating them.

Did the US and West learn nothing from two global wars?

Is a third one inevitable with thermonukes able to end life on earth in short order if detonated in enough numbers?

Will US imperial arrogance kill us all? A nation unwilling to observe the rule of law makes the unthinkable possible by accident or design.

The latest hostile to China Trump regime shoe to drop was unacceptably ordering closure of its Houston consulate by Friday — defying the 1961 Vienna Convention on Diplomatic Relations and common sense.

The international treaty to which both countries are signatories defines the legal way diplomatic relations between countries are supposed to be conducted.

It codifies basic rules of diplomatic law, enabling diplomatic missions to operate without fear of coercion or harassment where they're located.

Its successful implementation depends on observance of international law by its signatories.

Dated July 23, China's US embassy issued a strongly worded statement in response to the Trump regime's ordered closure of Beijing's Houston consulate for invented reasons, not legitimate ones.

Here it is in full, reflecting justifiable anger by its ruling authorities:

"On July 21, the US abruptly demanded that the Chinese Consulate-General in Houston cease all operations and events within a time limit."

"It is a political provocation unilaterally launched by the US side, which seriously violates international law, basic norms governing international relations and the bilateral consular agreement between China and the US."

"China strongly condemns and firmly opposes such an outrageous and unjustified move which sabotages China-US relations."

"China is committed to the principle of non-interference in other countries' domestic affairs."

"Over the years, Chinese diplomatic missions in the US, including the Consulate-General in Houston, have been performing duties in strict accordance with the Vienna Convention on Diplomatic Relations and the Vienna Convention on Consular Relations, and are dedicated to promoting China-US exchanges and cooperation and advancing the two peoples' mutual understanding and friendship."

"The US accusations are groundless fabrications, and the excuses it cites are far-fetched and untenable."

"For the US side, if it is bent on attacking China, it will never be short of excuses.

"Because of the willful and reckless stigmatization and fanning up of hatred by the US side, the Chinese Embassy in the US has received threats to the safety and security of Chinese diplomatic missions and personnel more than once."

"At the same time, the US side has more diplomatic and consular missions and personnel in China than China has in the US, another area where the principle of reciprocity is not reflected."

"The move of the US side will only backfire on itself."

"We urge the US side to immediately revoke this erroneous decision."

"Otherwise, China will have to respond with legitimate and necessary actions."

What's going on and escalating dangerously is the stuff wars are made of.

Unacceptable death threats were made against Chinese diplomatic  personnel in the US.

China's Houston consulate was its first in the US, opened in 1979. As of late Friday, it'll be the first ordered closed by Trump regime ruling authorities.

In summer 2017, its hardliners unacceptably ordered closure of Russia's San Francisco consulate, along with two diplomatic facilities in New York and Washington. They remain closed.

Assuring a significant Chinese response, Trump's hostile action indicates likely more of the same to follow, pushing bilateral relations toward a breaking point, past a point of no return for the near or longer-term.

The former diplomatic facility was US headquarters for months of its orchestrated violence, vandalism, and chaos in the city last year and sporadically in 2020.

In January, Trump's State Department evacuated its diplomatic staff and family members, bringing them home in response to COVID-19 outbreaks in the city.

They haven't returned because Beijing ordered them tested and quarantined for a number of days to prevent any infected with the virus from spreading it to others.

The State Department refused to accept this arrangement, no resolution of this issue achieved so far.

The Treaty covers legal and diplomatic obligations of signatory nations.

Protecting the public health of host countries is another matter entirely.

Closure of the consulate will disrupt business relations between China and these states, as well as occupied Puerto Rico, a so-called unincorporated US territory.

The mission of Chinese consulates, in part, is promoting trade, business, and other economic relations with host countries.

According to former Chinese economic counselor at its New York and San Francisco consulates He Weiwen:

"The US is randomly undermining diplomatic relations, and we have lost the political foundation for economic and trade cooperation."

Most nations rely on trade with China. Exports to the country aid their economies and create jobs, what's notably important in the current environment.

Britain and Australia harmed their own interests by allying with the Trump regime's hostile to China agenda.

Germany, France, other EU nations, and most Asian ones value bilateral economic relations with Beijing.

Pompeo has a hard sell. He's unlikely to get most world community nations to ally with the US against China at the expense of their own interests — what Beijing calls becoming "America's dupe."

China goes all out to foster cooperative relations with other countries, at war with none, threatening none.

Its geopolitical agenda is polar opposite how Washington operates, seeking global dominance — wars by hot and other means its favored strategies.

It's a prescription for endless conflicts that potentially risks global war 3.0.

Washington's imperial agenda, supported by both wings of its war party, makes the unthinkable possible.