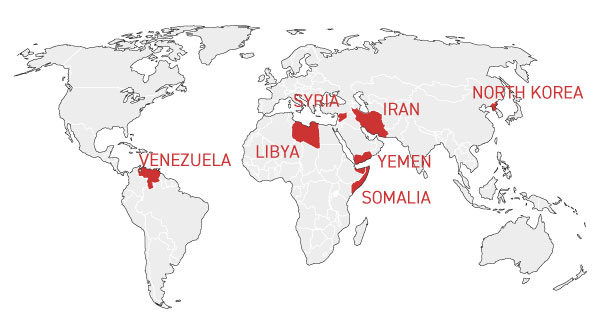 If all nations operated like Iran and Venezuela, world peace and stability would replace endless wars of aggression against nations threatening no one.

If countries worldwide refused to subordinate their sovereign rights to US interests, its imperial scourge would be in the dustbin of history where it belongs.

For the first time since WW II ended, humanity would be able to exhale.

As long as most nations operate as US colonies, subservient to its will, world peace, equity, justice, and adherence to the rule of law won't exist.

A permanent state of war on invented enemies will continue that could destroy planet earth and all its life forms if pushed too far.

When the scourge of Nazism and imperial Japan were defeated in 1945, a time in world history I remember vividly and the brief interregnum of peace that followed, who could have imagined that devastation and human misery would repeat endlessly in multiple theaters to this day.

There's no end of it in prospect, just the risk of things exploding to global war 3.0 with super-weapons in the hands of belligerent USA able kill us all if unleashed.

The UN Charter's preamble pledge "to save succeeding generations from the scourge of war, which twice in our lifetime has brought untold sorrow to mankind" proved empty words based on how things turned out since the mid-20th century.

The world at war rages because that's how the scourge of imperialism operates.

Today it's wrapped in the American flag, both right wings of the US war party pretending its mission is noble, wanting all nations remade in its own image by brute force if that's what it takes, the human cost considered irrelevant.

Megalomania defines Washington's imperial agenda — defined by Merriam-Webster as "a delusional mental illness that is marked by feelings of personal omnipotence and grandeur."

Like his predecessors, Trump was co-opted to serve the nation's privileged class by exploiting most others.

His regime's National Defense Strategy (NDS) is a blueprint for global dominance — endless wars by hot and other means, along with other hostile actions its favored strategies, trillions of dollars spent in pursuit of them at the expense of vital homeland needs gone begging.

His National Security Strategy (NSS) is much the same, a call to arms for endless preemptive wars.

It pretends normality is unattainable without US global control.

It maintains the fiction of barbarians at the gates, the necessity to confront them to protect and defend the nation's security at a time when no threats exist, just invented ones as a pretext for militarism and endless wars.

US new millennium NSS calls for first-strike use of nuclear weapons against any adversary, invented or real, nuclear armed or not.

It's a prescription for possible global immolation if a US president squeezes the nuclear trigger to advance the nation's imperium.

Today's brave nuke world can kill us all by accident or otherwise.

The scourge of US imperialism threatens everyone everywhere. It threatens planet earth and all its life forms.

If these weapons of mass destruction aren't eliminated, one day they may eliminate us.

Iran and Venezuela refuse to bow to Washington's will, free trade between them as international law allows an example of their sovereign independence, a model for other nations to follow.

US war on both nations by other means defies the rule of law. Nations obeying a higher power in Washington are complicit with its criminality, harming themselves at the same time.

Refusal to accept its bullying tactics is the most effective way to neutralize them.

The US needs allies to cow nations into submission to its will. Without them in enough numbers, it's powerless.

If growing numbers of world community nations follow the example of Iran and Venezuela by exercising their sovereign rights, consider what's possible.

Swords can be transformed into plowshares. Peace may break out all over.

National wealth can be freed up for vital homeland needs, a constructive agenda replacing a destructive one.

Militarism and invented enemies are the stuff that endless wars are made of.

Perpetual wars risk self-destruction. If a way isn't found to end them, they may end us.