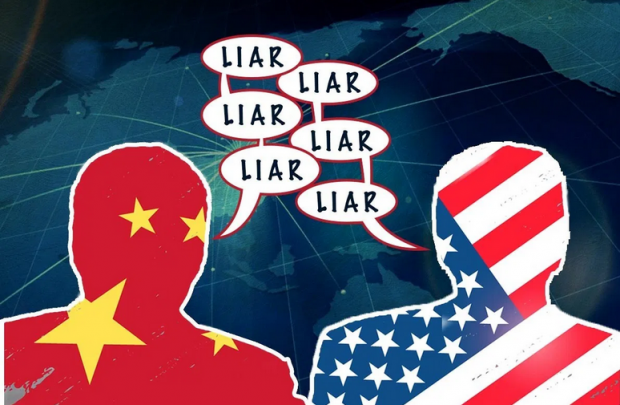 On May 9, China's Xinhua News Agency debunked numerous Trump regime Big Lies that are all about wanting Beijing falsely blamed for DJT's own bungling and indifference toward public health and welfare in how it's handling US COVID-1 outbreaks and economic collapse.

US allegation: COVID-19 is a "Wuhan virus." No evidence suggests it, plenty indicating otherwise.

Trump, Pompeo, and other regime officials presented nothing to indicate that the virus originated in China.

Reports of coronavirus outbreaks in China by its authorities were unrelated to its origin that's still unclear. Most likely, initial outbreaks occurred in the US or Europe last year.

The misnamed 1918-20 Spanish flu did not originate in the country. The false designation should have been changed long ago.

Belleville, NJ mayor Michael Melham believes he was infected with COVID-19 last November — weeks before the first outbreak in China.

US allegation: COVID-19 was developed in a Wuhan Institute of Virology lab.

Not a shred of evidence suggests it. In February, The Lancet medical journal maintained that the coronavirus originated in wildlife, citing 27 science experts.

The Trump regime is practically alone in claiming the virus was developed in a Wuhan lab. The US intelligence community and Pentagon reject the idea.

US allegation: COVID-19 leaked from a Wuhan lab. The facility a joint Sino/French operation, its work unrelated to designing or synthesizing pathogens like COVID-19.

Scores of researchers from numerous countries work at the lab, research information presented through published material, seminars and conferences.

In April, a French official said "there is to this day no factual evidence…linking the origins of COVID-19 and the work of the P4 laboratory of Wuhan, China."

US allegation: China could have contained COVID-19 outbreaks, but permitted foreign travel.

According to Science magazine, China went all-out to break the chain of transmission almost straightaway after outbreaks occurred.

Numerous cases were unwittingly imported, very few exported. Claims by Trump and Pompeo otherwise were and remain acts of mass deception, profound ignorance, or both.

Draconian lockdowns by China in Wuhan and other areas affected by COVID-19 outbreaks prevented much greater numbers internally and what might have been transmitted abroad if it hadn't addressed the problem effectively.

Trump's mishandling of US outbreaks let them continue to spread nationwide.

US allegation: Chinese COVID-19 infections were caused by eating bats.

They're not part of the Chinese diet. The Wuhan seafood market where some COVID-19 cases were identified does not sell bats.

US allegation: China is reopening wildlife ("wet") markets. There are none in the country.

Chinese legislation bans hunting and trading of wild animals, including for personal consumption.

US allegation: China's lack of transparency allowed the spread of COVID-19 outbreaks.

Once the virus was identified, China provided information about it to the WHO and world community.

Trump regime claims of coverup were and remain bogus, part of its hostile to China propaganda war.

On the same day, the Wuhan CDC conducted an epidemiological investigation and testing of the ill patients.

On December 31, the WHO was informed about the cases. On January 3, China began regular updates to the world community about what was discovered to be COVID-19, including to the US.

The Trump regime downplayed coronavirus outbreaks for weeks until a mid-March national emergency was declared  — 70 days after China reported cases of the virus, 40 days after it closed its borders to prevent their spread.

He wasn't arrested nor was he a whistleblower. On December 30, he reported cases of an unidentified infection.

Per China's Law on Prevention and Treatment of Infectious Diseases that established procedures for verifying and reporting them, he was told to stop spreading unconfirmed information about the ill patients, an official reprimand issued, later rescinded.

In January, he became ill from COVID-19, passing away from the disease in February.

US allegation: China failed to disclose COVID-19 contagiousness in time to prevent widespread US outbreaks.

In January 2017, the Pentagon knew about the threat of contagious coronavirus outbreaks.

It warned the Trump White House about a shortage of personal protective equipment, ventilators and hospital beds. No action was taken to address the issue.

Trump's claim that widespread outbreaks were "unforeseen (and) came out of nowhere" was a bald-faced Big Lie.

US allegation: China failed to report the true number of COVID-19 outbreaks in the country.

No evidence supports the allegation because none exists.

Revisions are common scientific practice when new information is learned. Issuing them is proof of transparency, not coverup.

The phony claim is part of US China bashing, Big Lies repeated by establishment media.

In late April, Lancet editor Richard Horton praised China for its openness and effectiveness in dealing with COVID-19 outbreaks — polar opposite Trump regime bungling and lack of transparency.

Trump regime politics failed to protect Americans from the threat of COVID-19 outbreaks for lack of preparedness and indifference toward public health and welfare.

China addressed the issue quickly and effectively. Results in both countries show which one acted responsibly and which one failed because of an I don't care attitude toward ordinary people.

US allegation: China bribed the WHO to gain its support in dealing with COVID-19.

The absurdity of the claim is self-evident, one of countless examples of the US blame game to shift public attention from its own war on humanity at home and abroad by accusing others of its own unjustifiable actions.

US allegation: Taiwan warned the WHO about COVID-19's contagiousness, but it wasn't taken seriously.

The WHO went public on this issue before the Trump regime admitted it exists. Beijing said no Taiwanese COVID-19 warning to the WHO occurred.

Its officials asked the organization for information about the virus after learning about it.

US allegation: China blocked Taiwan's bid to join the WHO.

Beijing considers Taiwan its sovereign territory, a breakaway province to be eventually reunited with the mainland.

In the early 1980s under then-Chinese leader Deng Xiaoping, "(o)ne country, two systems" became official Beijing policy, part of its plan for eventual reunification of Taiwan with the mainland, the island state to be treated like Hong Kong and Macau, retaining their own administrative systems.

The one China policy was first mentioned in the Shanghai Communique on February 28, 1972 during Nixon's visit to China.

The (1992 Consensus) one China principle affirms US recognition of one China comprised of the mainland and Taiwan — a matter Beijing considers non-negotiable.

Since China considers Taiwan part of its sovereign territory, the island state has no right to join the WHO on its own.

Only UN member states may join its agencies. When China adopted International Health Regulations, it stated that they apply to its entire territory, including Hong Kong, Macao, and Taiwan.

Beijing and the WHO agreed for Taiwan to have full access to information published by the organization.

US allegation: China is responsible for spreading COVID-19 outbreaks. The Trump regime demands that its ruling authorities be held responsible and pay damages.

There's no legal basis to the bogus claim and demand. There's no such thing as holding a nation responsible for an outbreak of disease.

China is the world's leading exporter of these supplies to around 150 countries worldwide.

According to its Commerce Ministry, scores of nations signed contracts with Beijing for delivery of these supplies.

US allegation: China's COVID-19 related aid to other countries aims to serve its political and propaganda interests.

US policy is all about demanding other nations bend to its will.

Ones unwilling to sacrifice their sovereign rights to US interests are targeted for regime change — war by hot or other means its favored strategies, along with old-fashioned coup d'etats.

US Allegation: China is meddling in Washington's electoral policy to prevent Trump's reelection.

The great Russiagate hoax was exposed as a colossal Big Lie. The same goes for its Chinagate offshoot.

There's no evidence that any nation ever interfered in the US election process — what imperialists in Washington have done scores of times throughout the post-WW II period.

US allegation: By requiring private exporters of medical supplies to comply with China's customs declaration procedures, it's enforcing a ban on these supplies to other countries.

Beijing's export requirements aim to insure quality control and safety. The state does not impose restrictions on commercial exports.

US allegation: China discriminates against African nationals in Guangdong province.

COVID-19 lockdowns and other restrictions applied to everyone equally in affected areas without discrimination.

On April 17, the BBC aired video that circulated on social media, allegedly showing a Kenyan couple attacked in Wuhan. It was filmed in New York.

It's a longstanding dirty trick used by Western media in cahoots with ruling regimes of their countries against targeted adversaries.

The US is at war on China by other means without formally declaring it.

Lots more US false accusations are likely ahead related to COVID-19 and other issues.

It's longstanding US policy since the 19th century — falsely blaming other nations for what they had nothing to do with in pursuit of its hegemonic aims.