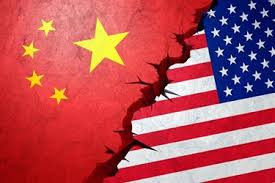 China Warns of Confrontation with US

On Sunday, China's official People's Daily broadsheet accused hostile Trump regime and congressional members of "politicizing (COVID-19 to) stigmatiz(e) other countries," while "tout(ing)" (the US) an an "international leader" in combatting the coronavirus — ignoring Washington's mishandled response, letting it spread widely in the US.

US Political Science Professor Tom Ginsburg said red state lawsuits against Beijing aim to "cover up for the US government's own errors," along with supporting Trump and GOP congressional candidates in November elections, a foolhardy stunt going nowhere.

Georgetown University Professor David Steward noted that "(a)ll those folks looking at China ought to be looking over their shoulder saying, 'Wait a minute, can we be sued?' "

On Tuesday, China's Xinhua slammed the US as a "disrupter-in-chief," adding:

The Trump regime "dropped the ball because of either self-conceited arrogance or gross negligence, or both."

The US is the epicenter of COVID-19 outbreaks and deaths. AP News reported that Trump dropped the ball in dealing with outbreaks and economic collapse.

The wire service described what it called his "cascading failures and incompetencies," adding:

"(A) nation with unmatched power, brazen ambition and aspirations…cannot come up with enough simple cotton swabs."

Xinhua stressed that instead of addressing and correcting its own blunders, Trump regime hardliners focus on coverup and blaming others for their own failures — including lack of transparency, a US specialty.

On Monday, Reuters said the following:

"An internal Chinese report warns that Beijing faces a rising wave of hostility in the wake of the coronavirus outbreak that could tip relations with the United States into confrontation, people familiar with the paper told" the wire service, adding:

US anti-China sentiment is the highest in decades, Beijing preparing for a possible worst-case scenario with the US, according to unnamed Chinese sources.

The wire service said it didn't see the report, but cited internal sources familiar with its findings and recommendations, adding:

It cannot "determine to what extent the stark assessment described in the paper reflects positions held by China's state leaders, and to what extent, if at all, it would influence policy."

"But the presentation of the report shows how seriously Beijing takes the threat of a building backlash that could threaten what China sees as its strategic investments overseas and its view of its security standing."

Sino/US mistrust and friction are deepest since before Nixon met with Mao and visited three Chinese cities from February 21 - 28, 1972.

Bilateral differences have little to do with trade, everything to do with China's rise on the world stage as a political, economic, industrial, technological, and military powerhouse.

Facing what increasingly looks like an uphill reelection struggle, part of Trump's campaign strategy focuses on blaming China and other countries for his own failures, including his regime's mishandling of the public health and economic crises gripping the US.

Instead of full-scale efforts to contain COVID-19 outbreaks, treat infected patients, and help growing millions of unemployed Americans get by during hard times, the Trump regime and Congress did pathetically little.

He rejected more aid for tens of millions of unemployed US workers unless a new stimulus package includes a cut in payroll taxes.

Along with other GOP hardliners, his aim is all about driving a stake through the heart of Social Security and Medicare by reducing or cutting off funding for these vital social programs.

They should be expanded in normal times. It's most important now following economic collapse that created human suffering that's likely to be protracted without government help for tens of millions without work and income.

Half of US households reported that one or more of its members lost employment or had their working hours slashed because of current conditions, according to a late April released Marist survey.

Things are getting worse not better. Trump falsely claims otherwise.

He's fiddling and whistling pass the graveyard while the US ship of state is sinking for the vast majority of its people, especially its most vulnerable.

On Monday, Public Citizen president Robert Weissman explained that a US public health crisis wouldn't exist "if we had a Medicare for All system," adding:

"(W)e need an immediate solution" to help tens of millions of Americans without healthcare coverage.

"At the very least, everybody must be guaranteed health care amid a national health emergency, without fear of facing bankruptcy or unmanageable bills."

Without it, many unemployed and poor Americans will likely skip seeking treatment, because of unaffordability, if develop coronavirus symptoms.

Public polls showed that around 14% of Americans will avoid treatment if develop a fever and/or dry cough, 9% if believe they're infected with COVID-19.

According to the America's Health Insurance Plans (AHIP) lobbying group, US health insurers "are bracing for an extraordinary increase in costs related to treating (insured) patients with COVID-19 infections."

AHIP is seeking congressional bailout help to deal with the issue.

Health insurers, the US wouldn't need if had universal coverage that would save hundreds of billions of dollars annually, will likely get help.

Expect ordinary Americans in duress without coverage to be largely shunned, including for treatment if ill and need hospitalization and/or expensive drugs.

Time and again, polls show most Americans support Medicare for all.

At times like now, it's crucial. Yet most congressional members and Trump oppose the idea.

Nations are best judged by how they treat children, their elderly, infirm, otherwise ill, and most disadvantaged.

The US fails the test on all counts under both right wings of the one-party state.