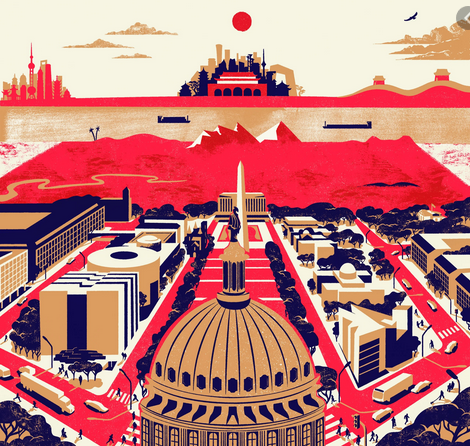 No End to US Propaganda War on China

All sovereign independent countries not controlled by the US are vilified to weaken and isolate them on the world stage — how the scourge of imperialism operates.

Establishment media go along as press agents for powerful interests.

The press is only free to elements owning and controlling them, propaganda the specialty of major ones in the US and other Western countries.

For good reason, the late Gore Vidal called the NYT the "Typhoid Mary of American journalism."

State approved propaganda on major issues saturate its editions, notably on its front page, what gets most attention, especially in lead paragraphs.

Like other establishment media, the Times rages against nations on the US target list for regime change.

Propaganda ad nauseam gets most people to believe almost anything, no matter how untrue.

Americans fearful of China, Russia, Iran, and other countries don't realize that the US faced no external threats from any nations since WW II ended.

Nor do mind-manipulated people understand that nations vilified by the US that it doesn't control seek peace, stability, and cooperative relations with other countries, polar opposite how the US, NATO, Israel and their imperial allies operate.

NYT hostility toward Beijing is longstanding. Over the weekend, it falsely accused its ruling authorities of "mishandling…the crisis that helped loose the coronavirus on the world (sic)."

Effective efforts by China in containing COVID-19 outbreaks and largely eliminating them domestically prevented their far greater spread than if its eradication campaign was slipshod the way the Trump regime mishandled things.

Until mid-March, Trump falsely downplayed outbreaks, pretending they're vanish on their own, showing ignorance, arrogance, and contempt for governance the way it should be.

All along to the present, his regime did pathetically little to help states.

It shows in numbers of US outbreaks and deaths, more than 12-fold China's outbreak toll, around the tally of seven other nations combined with the most COVID-19 cases.

On Friday, the US recorded its single deadliest day with over 2,900 fatalities.

It comes as around half of the US states began easing lockdown restrictions. Others announced similar plans, risking a second wave of outbreaks by loosening restrictions too soon.

In relations with other countries, China uses a carrot approach in contrast to US pressure, bullying and threats.

Not according to the Times, falsely accusing Beijing of "responding aggressively, combining medical aid to other countries with harsh nationalist rhetoric, and mixing demands for gratitude with economic threats (sic)" — no evidence cited because there is none.

European countries march in lockstep with the US, operating like subservient vassal states to a colonial master, taking orders from Washington, saluting and obeying, repeating US Big Lies about China as directed.

Their policies are similar in relations with Russia, Iran, Syria, Venezuela, and other nations on the US target list for regime change.

Failing to criticize the Trump regime's "interest in trying to sue Beijing for damages" relating to spreading COVID-19 outbreaks showed Times support for what demands denunciation.

Evidence one day may likely show that COVID-19 was made in the USA, unleashed on humanity in pursuit of its diabolical domestic and geopolitical aims.

It has the earmarks of a second 9/11 in new form with potentially far more destructive consequences to nations and ordinary people worldwide than the near two-decade earlier day that will forever live in infamy — US state-sponsored terrorism on a global scale.

Is it repeating again now in new form? The scourge of US rage for global dominance makes anything possible.

A likely key aim of what's going on is weakening and isolating China on the world stage, a scheme likely doomed to fail.

Decades from now or sooner, historians will likely look back at how Beijing became dominant on the world stage by pursuing cooperative relations with other countries in contrast to US rage for controlling them by brute force and other hostile actions.

Longterm, carrots work better than sticks, a lesson China understands, what the US never learned.

It shows in its failed agenda, repeating its past mistakes, compounding them, making enemies while China and Russia gain allies.