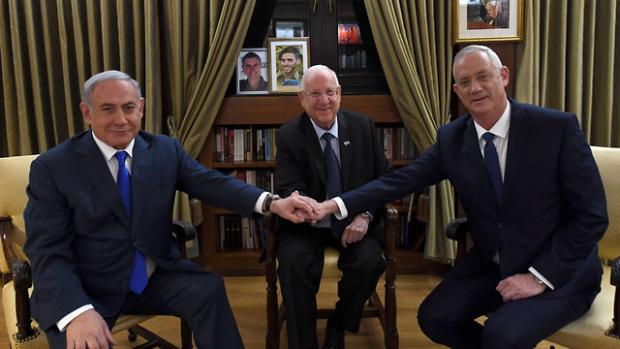 A weeks earlier agreement between them collapsed, a new unity deal struck.

Netanyahu prevailed. Gantz's surrender to his demands split his Blue and White (B &W) party.

It may have ended his chance to become prime minister, his political career perhaps ruined by reportedly agreeing to most Netanyahu demands — a Gantz Versailles as things now stand.

On Monday night, capitulation was formalized, a "national emergency government" formed, ending over a year of political stalemate.

"We'll fight the coronavirus and look out for all Israeli citizens. We have a national emergency government."

Netanyahu remains prime minister at least for the next 18 months, Gantz to serve as deputy PM and war minister with veto power over who'll serve as Knesset speaker, Gantz ally Gabi Ashkenazi (another former IDF chief) to be foreign minister.

Terms of the deal give Netanyahu veto power over appointments of Israel's next attorney general and state prosecutor.

In other words, he'll have say over who'll prosecute him for bribery, fraud and breach of trust in trial proceedings scheduled to begin on May 24 — unless postponed again, a real possibility.

Netanyahu and Gantz will share power on appointment of new judges, along with other members of Likud and remnants of the Blue and White party.

Given how Netanyahu got Gantz to capitulate on key terms of their deal, the PM will likely have most say on who'll become appointed judges, ones favoring his interests likely to be chosen.

Should coalition government unravel during the next 18 months, Gantz would take over as prime minister.

If Netanyahu retains the post over this time period and remains free from imprisonment for serious offenses, it's unclear if he'll relinquish his portfolio to Gantz as terms of their deal stipulate.

All along from early last year to now, he manipulated things to get his way, his tactics likely to continue as long as he remains in power.

Yet Israel's High Court could disrupt his best laid plans by disqualifying him from serving as prime minister if convicted of charges against him.

If this occurs, new elections would be held, returning things to an unsettled status quo.

Many Gantz supporters feel betrayed by his capitulation to most Netanyahu demands.

While Gantz and remnants of his Blue and White party have some degree of checks and balances power under the deal agreed on, Netanyahu showed he's wily enough to get his way most often.

A founding Blue and White party source said the Netanyahu/Gantz deal agreed on breached B & W's "founding vision" while retaining some power over Netanyahu's Likud.

Since COVID-19 outbreaks began in Israel on February 21, Netanyahu used the situation to his advantage, including postponement of his trial scheduled to begin on March 17.

Gantz agreed to let him proceed with annexation of whatever Palestinian land was signed off on by the Trump regime, including the Jordan Valley and northern Dead Sea that comprise about 30% of the West Bank.

Israeli plans for the area include further urban, agricultural, and energy development — Palestinians already prohibited from entering or using nearly 90% of the territory for any purpose.

Almost half of the Jordan Valley is called state land, most of the rest designated closed military zones, nature reserves, and land set aside for regional councils administered by local officials of settlements.

After vowing never to be part of a coalition government headed by Netanyahu, Gantz yielded to his key demands — destroying B & W party unity along with his own standing in the eyes of many supporters.

Saying he's "at peace with (himself) and…with (his) decision" defies reality.

Haaretz editors slammed his capitulation, saying his "lack of understanding is colossal," adding:

"Instead of pursuing his wish to restore Israel to a path of statesman-like behavior and the rule of law, he may turn out to be the person extricating Netanyahu from his legal predicament."

COVID-19 "is a smokescreen used by Netanyahu to maneuver (Gantz) into a unity government trap…turn(ing) his back on (supporters, letting) Netanyahu…use (him) to dismantle the rule of law."

His actions likely prevent enactment of Knesset legislation that "would prohibit a person under criminal indictment from forming a government."

His capitulation permitted what should be impermissible.

Instead of demanding that Netanyahu be held accountable for charges against him in trial proceedings as soon as possible, Gantz handed him a possible stay out of jail free pass.