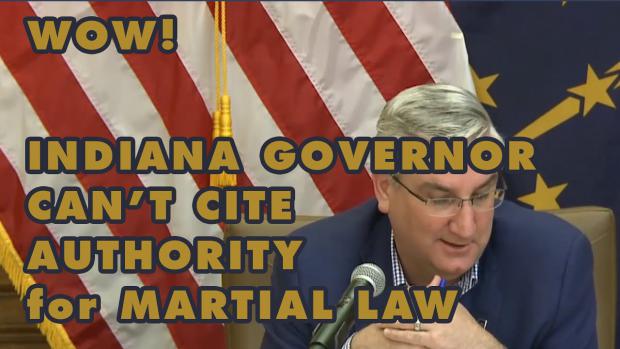 Editor's Note: Whereas it is my belief that COVID-19 is a real disease, and thus happy to voluntarily abide by a request to limit unnecessary travel & gathering, allowing a governor to dictate via executive fiat a demand to stay at home sans all peaceable assembly & worship while his office wholly lacks the enumerated authority to suspend the State Constitution is simply too dangerous. Most especially whereby 6.6 million already have their economic lives destroyed contrasted by wildly contradicting estimates & statements made by CDC & state health departments.

UPDATE 01 – 04/06/2020: South Dakota Governor Kristi Noem says NO to Stay at Home Order as she states such is unconstitutional at both federal & state level and she doesn't wish to mimic Chinese Communist response to COVID-19 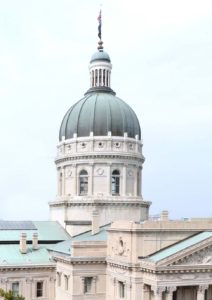 INDIANAPOLIS – On Monday, March 23, 2020, Indiana Governor Eric Holcomb issued Indiana Executive Order 20-08, i.e. stay at home order, effectively suspending the Indiana Constitution by mandating Hoosiers be confined to their homes lest they work in a government defined "essential" business or must run an "essential" errand, although the latter has since been further restricted by additional capricious strokes of a pen.

Eleven days later, and like a poorly scripted television drama, the governor held his daily press conference, flanked by his socially distanced un-elected appointees and indicated he would surprise… extend the lock down for another two weeks.

Apparently ruining the lives of 120,000+ Hoosiers via forced unemployment just through the end of March doesn't satiate the appetite of a governor drunk with power. He then went on to scold Hoosiers for daring to get news from sources other than the government, which should be noted continue to contradict both themselves, the CDC, and the White House from one day to the next.

He then opened the press conference to questions, most of which came from overly-congratulatory state-worshiping sycophants, but as they say the exception proves the rule, one journalist actually demonstrated he still possessed a spine. Jeff Smith of WFLI  asked Governor Holcomb that "some people" (presumed to be yours truly) were asking whether the stay-at-home order was constitutional.

However, the governor was obviously not prepared to answer per his own and Dr. Box's body language as such certainly illustrate a level of discomfort as he stumbled, searched and still failed to simply point to the specific section under ARTICLE V in the Indiana State Constitution that grants him the ability to suspend the document absent open rebellion.

Pointedly for a governor who claims the alternative press are to blame for panic & confusion, his reliance upon logical fallacies, bandwagon in this particular exchange is utterly repugnant. How can you claim carte blanch authority to declare Martial Law and when asked to clarify, lean on "well I'm not the first." as your primary justification?

So Tell Me Again: When Did We Agree that "Guidelines" Supplant Laws and Laws Supplant the Constitution? – Show Me the Amendment

However despite the obvious violation of the People's inalienable Natural Right to Peaceably Assemble & worship the God of their conscience in the mode they so choose as enumerated in the First Amendment of the U.S. Constitution, which is applicable via the United States Supreme Court "Incorporation Doctrine" deflating entirely his claims of "Broad Authority" as the executive orders seek to gut the core of the Indiana State Constitution in toto, which is not permissible as our constitution is the Supreme Law of the state and cannot be supplanted merely by Indiana Code.

To alter a constitution requires one to specifically follow the document's procedure for amendment, which is not the case as it relates to Governor Holcomb's present actions and claimed authority.

Most plainly, Governor Holcomb purposefully does not posses the power to issue such an edict via executive fiat. Further this absolute fact was not mere oversight by those who formulated either the original 1816 or the present ratified state constitution of 1851. Nor is the lack of such authority absent in consideration of a health emergency as powers thereto are precisely delineated within our state's foundational charter. Whereas the governor's order violates multiple portions of the Indiana State Constitution, we shall start here: 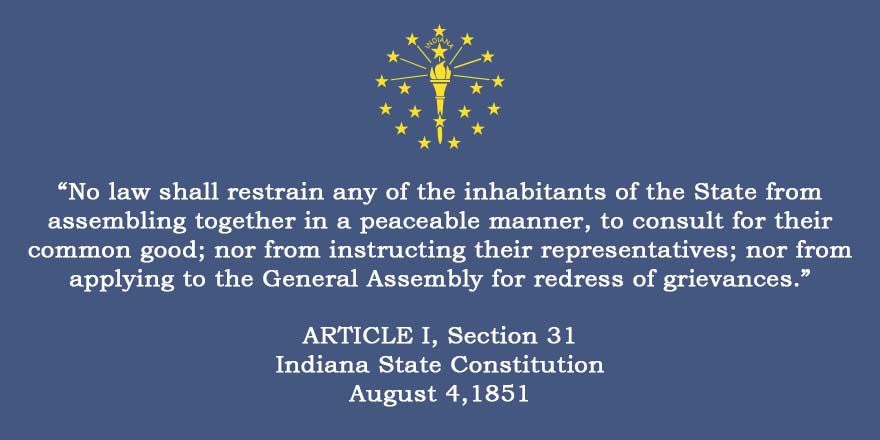 Of note, in American Jurisprudence the authority to suspend a constitution is reserved for the condition of "Open Rebellion" of which is not the case in Indiana nor the several other states being incrementally flipped into a soft Martial Law wholly relying upon the Special Pleading fallacy for COVID-19. However, while considering the utter destruction of people's lives, businesses et al unto this defacto house arrest, I am remiss to see how the arbitrary imposition of extra-constitutional tyranny does not set the table for such conditions to arise, which by all reasonable review is a situation vastly worse than any disease.

Inter arma silent leges —that the law, along with the liberty that it protects, falls by the wayside when a country is threatened.

Further, as it relates to the suspension of constitutions, historical context provides illumination that even during the War of 1812 as the White House & U.S. Capitol were in flames burning to the ground, several states threatening to secede and rejoin the British Crown, and as America was occupied by a foreign invading army, then President James Madison refused to suspend the U.S. Constitution, despite numerous members of his administration desiring such action, he believed ultimately the People would rise to the occasion. Indeed our American ancestors did, defeating the British for a second time, and whose Patriotic resolve & tenacity provided the inspiration for Francis Scott Key to draft what would become our National Anthem.

Authorizing Forcible Removal of Hoosiers from their Homes

Preceding the Governor's stay at home order, and despite both alternative media as well as mainstream media seeking clarification thereto, Indiana Executive Order 20-04 sets in motion the framework to have Hoosiers forcibly removed from their homes at the discretion of the Indiana Department of Health & Indiana Department of Homeland Security.

When asked to expound as why the Indiana National Guard was activated and precisely as to what role they would play regarding COVID-19, his office told RTV-6 in Indianapolis:

"At this time, the Indiana National Guard is involved in planning, preparation and logistics with other state agencies,"

Since originally being published, Governor Holcomb's office & the Indiana National Guard released a short video stating the role is to "help" during the response to the COVID-19 outbreak. This does nothing to address the specific concerns that the legal framework instituted under EO-20-04 can result in forcible evacuation.

History is replete with how very quickly things can go south when armed services begin domestic operations especially unto hastily assembled & vaguely worded orders created via extra-legislative process. From door to door gun confiscation during Hurricane Katrina, to Louisville residents being forcibly tagged & tracked to present day soldiers going door to door already in Texas, inter-state checkpoints cropping up across the country in Rhode Island, Florida, and Texas the danger is simply too great to be left to wide-open interpretation especially by the same branch of government issuing and authorizing the decree.

Section 10. Public Health Intervention – The Commissioner of the ISDH shall make determinations as to quarantine, isolation and other necessary public health interventions as permitted under Indiana law.

Section 11. Evacuation – …utilize all property, equipment and facilities owned rented, operated or maintained by the state, to house and/ or shelter persons who may need to be evacuated from a residence, dwelling, building, structure or vehicle during the course of this emergency.

We are presently awaiting a response from Attorney General Curtis Hill's office following his announcement that gun stores cannot be closed and he cites Indiana Law in the article from The Indy Channel. Moreover any reasonable review clearly sees such as part of the "Doctrine of Incorporation" whereby through several rulings over the centuries the United States Supreme Court, demands all states in the union as a bare minimum must apply the first eight (8) amendments of the federal constitution to all inhabitants of a state.

In addition, several members of the Indiana General Assembly are beginning to ask the same question as to where Governor Holcomb cites such authority to enact a soft Martial Law.

We shall update the article upon receiving their replies or lack thereof. 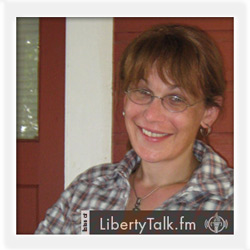 Allison Bricker is a lifelong political junkie, having worked on political campaigns at the local, statewide, and national levels. It is her view that the U.S. Constitution is the most eloquently written attempt by humanity to date, designed to restrain a government.

However, even in its beautiful simplicity, the document, as witnessed by the current reality of American life whereby the central government decrees authority to assassinate & indefinitely detain American Citizens without evidence/trial, torture [read: NDAA of 2012], endlessly spy, molest any/all who travel, hands authority over monetary policy and the currency to a private central bank, succinctly illustrates the document failed to stop the relentless onslaught of Authoritarians who seek to rule over a free & peaceful people.

However, she feels perhaps said criticism is more aptly directed towards both ourselves and our ancestors in failing to properly exercise the eternal vigilance demanded to keep the small cabal of tyrants that have in a myriad of ways sought to enslave and reduce the Liberty of humanity throughout the ages.

Thus, when not interviewing the best and brightest voices in the Liberty Movement, she regularly cheer-leads and advocates for individuals to peacefully withdraw consent and nullify the sociopaths occupying "The District of Criminals," ergo D.C.