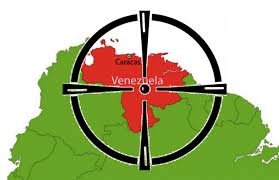 Trump Regime Scheme to Transition from Democracy to Tyranny in Venezuela

It was transplanted from Berlin, Tokyo, and Rome to the US — under new management.

Today it's infinitely more menacing to world peace, stability, equity, justice, and the rule of law because of super-weapons able to destroy planet earth and all its life forms in a matter of days if unleashed full-force.

All nations not bending to Washington's will at the expense of their sovereign rights are on its target list for regime change — by hot wars, economic wars, financial wars, and other means.

Venezuela is a prime US target because of its world's large oil reserves, a prize both right wings of its war party covet.

It's also because of Bolivarian model democracy, an equitable system the US tolerates nowhere, especially not at home.

Its majority hardliners want it replaced with US-controlled and exploited puppet rule.

Everything US regimes threw at Venezuela since Hugo Chavez's December 1998 election as president failed.

It includes a laundry list of demands no responsible leadership anywhere would accept — amounting to unconditional surrender and abandonment of the fundamental rights of all Venezuelans.

On the phony pretext of seeking democratic transition in a nation with the hemisphere's model system, the scheme is all about replacing it with US-controlled fascist tyranny.

It calls for abolishing the constitutionally established National Constituent Assembly and seating three anti-Bolivarian National Assembly MPs accused of electoral fraud to give opposition lawmakers super-majority control of the body.

Venezuela's Supreme Court ruled National Assembly actions null and void as long as these members are involved in instituting them.

Release of prisoners convicted of crimes against the state falsely called "political prisoners."

Departure of foreign forces from the country "immediately" — meaning Russia's military presence — part of strategic partnership since 2001, currently involved in providing technical assistance, along with helping to protect Venezuela's security and sovereign independence.

It also means removal of Cuban doctors, teachers, and other professionals involved in helping Venezuelans.

Establishment of a so-called "Council of State" with US controlled anti-government members sharing power with Bolivarian ones — headed by a "secretary general…who serves as interim president," replacing Maduro and US-designated puppet Guaido.

"All powers assigned to the president by the Constitution will be vested exclusively in the Council of State."

The "Council of State appoints a new cabinet."

A so-called "Truth and Reconciliation Commission is established" to falsely hold Bolivarian officials accountable for US orchestrated crimes against the state and its people.

In "6 - 12 months," US manipulated elections will be held to assure its control eliminates Bolivarian social democracy.

There's more but you get the idea. The Trump regime seeks a total makeover of Venezuelan society.

It wants US control replacing governance of, by, and for all Venezuelans equitably — what Bolivarian rule is all about, polar opposite US policies that serve its privileged class exclusively at the expense of most others.

What Pompeo called a "man-made crisis in Venezuela" was made in and enforced by the US — war by other means on its people, aiming to cause maximum pain and suffering, along with wanting Venezuela's economy crushed.

Below is the full same-day Maduro government response — translated to from Spanish to English:

The "Bolivarian Government reiterates that Venezuela is a free and sovereign country that does not accept tutelage from foreign governments."

"The Bolivarian Republic of Venezuela has learned through the media of the presentation of a supposed 'Framework for Democratic Transition' by the United States Department of State today."

"In this regard, the Bolivarian Government reiterates that Venezuela is a free, sovereign, independent and democratic country that does not accept, nor will it ever accept, any kind of tutelage from any foreign government."

"The policy of the United States towards Venezuela has completely lost its way."

"In one week, it has wandered among constant contradictions,"

"It ranges from extortion and threats against officials of the Bolivarian Government, including rewards for their capture; to the presentation of an outrageous agreement for the installation of a supposedly unconstitutional transitional government, ignoring the democratic will expressed by the Venezuelan people at the polls."

"The pseudo American proposal confirms that the officials of that country are completely unaware of the Venezuelan legal system and the functioning of its institutions."

"It is noteworthy, however, that they include the curious decision to remove the seat of the deputy illegally proclaimed as interim president, who was chosen by them in 2019 as the spearhead of their coup strategy and who has complied with the orders given from Washington, through the paths of violence and persistent conspiracy."

"The actions of the Trump (regime) in the last few days against Venezuela cannot be categorized in any other way: They are miserable."

"Trying to take geopolitical advantage in the midst of the most dreadful global pandemic can only come from the misery of people without the least sensitivity and social concern, especially considering that the people of the United States are one of the most affected in the world, given the resounding failure of that country's health system and the erratic, improvised and inhumane handling of the pandemic by its rulers."

It is precisely the Trump (regime) that must step aside, lifting the unilateral coercive measures that even its own legislators recognize that in practice prevent Venezuela from acquiring humanitarian supplies to confront Covid-19."

"It is time for them to abandon their failed strategy of changing the government by force in Venezuela, to cease their continuous and obsessive aggression and to concentrate on their serious internal affairs."

"Neither threats, nor extortion strategies, nor the attempt to impose false agreements will succeed in distracting the attention and energy of President Nicolás Maduro, his government, the Bolivarian National Armed Forces and the Venezuelan State as a whole, in protecting the people of Venezuela in such difficult times for humanity."

"Venezuela will remain unscathed by any aggression and united in the defense of its sovereignty and independence."