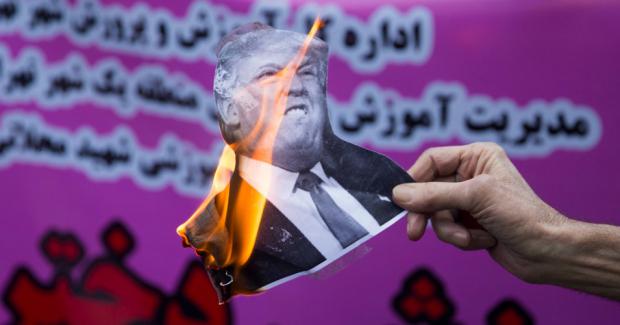 No nation may legally impose sanctions on other countries, entities or individuals — an exclusive Security Council prerogative.

The US operates by its own rules extrajudicially, long ago abandoning the rule of law in pursuit of its imperial interests — including exploitation of its own people.

Since its 1979 revolution, ending a generation of US installed fascist tyranny, the US has been at war on Iran by other means.

It's all about wanting its sovereign independence replaced by pro-Western puppet rule, along with control gained over its vast hydrocarbon reserves and eliminating Israel's main regional rival.

There's no ambiguity about this, what the world community of nations understands.

US hostility toward Iran has nothing to do national security. The Islamic Republic threatens no one.

Claims otherwise by Trump and Netanyahu regime hardliners are bald-faced Big Lies. Repeated by establishment media gets most people to believe what's untrue.

Ignorant of Iranian history, they don't know that its ruling authorities haven't attacked another country in centuries, threatening none now — what the US, NATO, and Israel prioritize against nations on their target list for regime change.

Illegal US sanctions on Iran are especially harmful to its people at a time of spreading COVID-19 outbreaks.

According to Iran's Health Ministry, nearly 6,000 infected patients recovered, a hopeful sign at a time of nationwide angst.

From 1979, embargo + regime change again became staple of US policy on Iran - even amid #covid19

The Trump regime ignored an International Court of Justice (ICJ) ruling, ordering it to lift sanctions on food, medicines, and other humanitarian supplies.

Claims by Trump regime hardliners that these products are exempt from its sanctions are bald-faced Big Lies.

US policy aims to isolate Iran politically and economically. It aims to crush its economy and immiserate its people, wanting maximum harm imposed.

A national mobilization plan was implemented to contain the spread of the virus and provide treatment for infected patients.

It includes thousands of health centers and clinics nationwide to deal with outbreaks, including quarantine of areas as needed.

The number of labs involved in testing for infections will be doubled in the coming days.

Iranian officials are urging nations to ignore illegal US sanctions at a time of a public health emergency.

According to Iran's Deputy Health Minister Alireza Raeisi, more than 22 million people in the country were screened as part of a national campaign to curb the spread of the virus.

Thousands of temporary clinics are involved in the task that's likely to continue for some time.

On Friday, Iran's UN envoy Majid Takht-Ravanchi called for global cooperation to deal with and contain COVID-19 that spread to most countries worldwide, Iran one of the hardest ones hit.

The world community of nations is obligated to ignore US sanctions at a time when Iran is dealing with a national health crisis that knows no borders.

On Friday with his Japanese counterpart, Zarif urged Foreign Minister Toshimitsu Motegi to bypass US sanctions so Iran can get urgent medical supplies.

On the same day, Japan's envoy to Tehran Mitsugu Saito said his country is providing Iran with $23.4 million in financial aid to combat the disease.

Russia and China are helping. Their officials urged their counterparts in other countries to do the same thing.

Downplaying the devastating effects of US sanctions on Iran and failing to explain their illegality, the NYT falsely blamed its official for Trump regime imposed misery on the nation and its people.

Defying reality, the WSJ blamed what it called Iran's "strategic partnership with China (as the cause) of (its) coronavirus outbreak."

Strong evidence suggests that COVID-19 was manufactured in the US, not Wuhan, China, a likely US bioweapon infesting nations and spreading — notably in targeted countries China, Iran and Italy.

It's a major international cooperation agreement among participating countries for increased industrialization and trade, involving over $1 trillion in longterm investments.

The Washington Post surprisingly explained that while COVID-19 "ravages Iran, US sanctions (are) squeez(ing) the country."

The London Guardian reported that Britain urged the Trump regime to ease sanctions on Iran so it can import vitally needed medicines and medical supplies.

Nations observing illegal US sanctions on Iran and other nations are complicit with its high crimes.

The world community of nations, especially European ones, needs to grow a collective backbone of resistance against Washington's global war on humanity.

At a time of spreading COVID-1 infections worldwide, now is the time to do it to combat what will likely affect all nations before things subside.