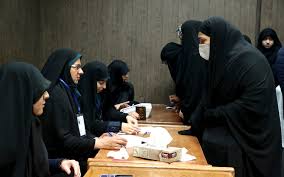 On Friday, Iranians turned out in large numbers to select members of parliament, its Majlis, and seven members of its 88-member Assembly of Experts.

Held every four years, at stake are 290 seats in parliament, candidates aged-30 to 75 eligible to run.

Around 58 million Iranians are eligible to vote, citizens aged-18 or older.

Candidates from 208 constituencies ran for office, Tehran the largest.

According to Iran's Interior Minister Abdol-Reza Rahmani-Fazli, over 91% of political aspirants were approved by the Guardian Council to run for parliament on Friday — 7,148 candidates for 290 seats.

In Tehran, 1,453 candidates contested for 30 seats. No limitation exists on how often incumbents and former incumbents can seek reelection.

Around 85% of voting is electronic. Principalists (conservatives) vied with Reformists for parliamentary seats.

When last held, Reformists gained control of parliament with moderate candidates by a 137 - 120-seat majority over Principalists.

Due to large numbers turning out Friday to vote, 54,611 polling stations scheduled to close at 6PM stayed open to 10PM, as late as midnight where needed to accommodate voters.

"Look at how US propaganda seeks to separate the people from the Islamic system. They create think tanks to plot this."

"They seek to distance the Iranian youth from the Islamic system, but they won't succeed."

"Enemies and friends are watching. Enemies want to see the result of these economic problems, the Westerners' deceit in their promises to us, and the US pressures on the people."

"Our friends watch worriedly, but we always tell them not to worry. The Iranian nation knows what it's doing."

"Taking part in the elections nullifies many of the vicious plots of the US and the Zionist regime against Iran."

"These elections repel the schemes and ploys of the enemies of Iran."

"Iran should become stronger. This frustrates the enemy. One manifestation of strength is having a strong Majlis."

"The more participation there is in the election, the stronger the Majlis will be. This is one factor for strengthening the Majlis."

According to Press TV, partial results show Principalists ahead, including a clear lead in Tehran.

"In certain constituencies, however, releasing results will take until Sunday due to the number of candidates."

Winning a minimum of 20% of votes cast in each constituency is required to gain a seat in parliament.

A follow-up election is held for undecided constituencies.

Based on what's known so far, Principalists appear heading for a parliamentary majority.

According to DJT's envoy for regime change in Iran Brian Hook, targeted individuals "denied the Iranian people free and fair parliamentary elections" — how the US political system operates, not the Islamic Republic's.

Friday's action was symbolic, part of US war on Iran by other means.

Ongoing for over 40 years, it's part of what US imperialism is all about, a scourge threatening everyone everywhere.

No Breakthroughs in JCPOA Vienna Talks