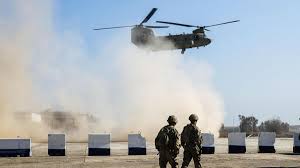 According to what appears to be NYT fake news, the self-styled newspaper of record claims "(t)he (US) military resumed joint operations with Iraq on Wednesday…ending a 10-day pause that began after an American airstrike killed a top Iranian military commander in Baghdad," adding:

Further Times disinformation claimed the Pentagon wishes to resume operations against ISIS in Iraq — failing to explain that the US created and supports the terror group and likeminded ones,  pretending to combat jihadists used as imperial proxies.

The Times added that it's unclear if Iraqi authorities approved resumption of joint missions — apparently not.

According to Prime Minister Mahdi's office, a spokesman said the following:

"The joint operations have not resumed and we have not given our authorization." Claims otherwise are false, adding:

Baghdad authorities ordered US and allied forces to halt their operations in the country, following the Pentagon's assassination of Iranian General Soleimani and de facto Iraqi PMU commander Muhandis on January 3, adding:

An unnamed Pentagon source said it had no information on the resumption of joint operations.

The Trump regime's spokesman in Baghdad declined to comment on the issue.

Prime Minister Mahdi and Iraqi parliamentarians called for US and allied forces in the country to leave. They're persona non grata.

Connected to the Pentagon Stars and Stripes publishes material related to US military operations.

On Thursday, it said F-15 warplanes were deployed to Saudi Arabia's Prince Sultan Air Base — within easy striking distance of Iranian and Iraqi territory.

According to US Army Secretary Ryan McCarthy, new missile defense systems and other military equipment is being sent to the region.

Around 3,000 Pentagon troops were shifted from war games in Norway to the Middle East in preparation for possible confrontation with Iran.

Around 4,000 paratroopers and 2,000 marines aboard an amphibious assault vessel are in the region or on the way, along with six B-52 nuclear-capable bombers sent to Diego Garcia in the Indian Ocean, within striking range of Middle East targets.

Although neither the US or Iran want war, and it's highly unlikely, it's possible by accident or design because of longstanding US rage to transform the Islamic Republic into a US vassal state.

The US already is waging endless wars in Afghanistan, Syria and Yemen, intermittent drone wars elsewhere, along with maximum pressure economic terrorism on Iran, Venezuela, North Korea, Russia and other countries.

Trump's top priority is getting reelected. Hot war with Iran could make him a one-term president if enough body bags of US military personnel come home — highlighted by media wanting him defeated.

Is it enough to restrain him or will he let hardliners in charge of his geopolitical agenda push him to wage war on Iran the US can't win?