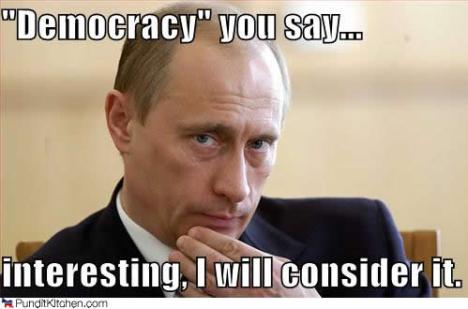 Democracy in Russia is the real thing. In the US, it's pure fantasy, the way it's been from inception.

African Americans were considered property, not people, until the 13th Amendment (1864).

The US has been racist from inception. Endless state-sponsored war on Black Americans goes largely unreported.

Blacks advanced from chattel to wage slavery, from Jim Crow to its modern-day version, from dubious freedom to mass incarceration.

The vast majority of Americans get the best democracy money can buy, what Michael Parenti called Democracy for the Few in his book by this title — dispelling popular myths, setting the record straight, explaining who benefits at whose expense.

America the beautiful exists for the privileged few alone, how it's always been, clearly how things work today.

In his Jan. 15 annual state of the nation address, he proposed amendments to the country's Constitution to ensure "development of Russia as a welfare and rule-of-law state" — his proposed constitutional changes to be voted on by national referendum, giving ordinary people the right to decide up or down.

He called for greater parliamentary powers, including to appoint members of the government, enhancing the prime minister's role, limiting presidential prerogatives — weakening the executive, not strengthening the office as US media falsely claimed. More on this below.

Putin said Russia should remain a "strong presidential republic," the executive to choose the prime minister, his or her deputies, remain in charge of the military, and exercise control over the judiciary.

At the same time, he proposed limiting presidential power by increasing the role of parliament in running the country.

The militantly Russophobic NYT falsely claimed "Putin is maneuvering to stay in power when his term ends in 2024 (sic)," adding:

He "proposed sweeping constitutional changes that could extend his hold on power indefinitely (sic)." He did nothing of the kind.

Putin proposed the continuity of three pillars of government — the executive, parliament, and the judiciary.

According to political analyst Ben Aris, his aim is "constructing a long term stable political system with checks and balances where the bits of the government play the proper role as defined by the constitution which is not the case now."

"Putin is thinking about (increased) democratization of political power in Russia."

He's preparing for transition to when his tenure as president expires in 2024.

The Times falsely accused him of formulating "a strategy for keeping power after the end of what is supposed to be his final term in 2024 (sic)."

"Colleagues, the decision has been taken. We have given consent to the appointment of Mishustin Mikhail Vladimirovich as prime minister by the president of the Russian Federation."

A PhD in economics, his dissertation was titled "Mechanism of State Fiscal Management in Russia."

He's been a low-profile technocrat until now. As prime minister, he'll recommend choices for his deputy and other ministerial positions — coming "in the near future," he said.

"The first thing to do is to seriously engage in institutional and management reform, and, of course, bring in the most advanced information technologies."

Medvedev reportedly was offered the position of Russia's Security Council deputy chief, a demotion from his status as prime minister.

His proposals are all about preparing for transition when he steps down as president in 2024 at around age-72 — either retiring to private life or accepting new a public capacity to help his successor and others in government.

He's the preeminent world leader of our time, a peacemaker  deploring wars, instability and chaos – what imperial USA prioritizes, its strategy for global conquest and control.

He's overwhelmingly the most popular member of Russia's political class. Paul Craig Roberts called him "the most impressive leader on the world stage," Russia rising with him as head of state.

He'll be sorely missed when gone, his state of the nation proposals all about preparing for transition to continue and grow Russia's geopolitical stature under new leadership in four years.

The Wall Street Journal falsely said he "move(d) to shore up power…call(ing) for (a government) overhaul that could empower him after he exits the presidency in 2024 (sic)."

Based on what he proposed, his aim is polar opposite false US media claims, hostile to him throughout most of his tenure.

In his Wednesday state of the nation address, he said proposed amendments "do not concern the fundamental basics of the Constitution."

"The main thrust of these amendments will be to ensure Russia's further development as a social state ruled by law, enhance the effectiveness of national institutions, strengthen the role of civil society, political parties and our regions in formulating the most important decisions related to the development of our state."

Voters will have final say by national referendum on constitutional changes he proposed, what democracy is supposed to be, what's absent in the US and other Western societies.