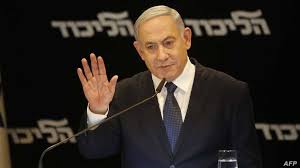 Netanyahu "damaged the image of the public service and public trust in it (by abusing his office), knowingly "taking a bribe as a public servant in exchange for actions related to (his) position."

He arranged favorable coverage from telecommunications company Bezeq in return for political favors to the firm.

He got lavish gifts from Israeli billionaire Arnon Milchan in return for other political favors.

There's no getting around clear evidence against him — following what Mandelblit called "a thorough examination" of the facts.

Israeli police and the State Prosecutor's Office called for his indictment. Israeli law only requires an indicted prime minister to step down if convicted.

Ahead of a new year's eve deadline, Netanyahu requested Knesset immunity from prosecution by letter to speaker Yuli Edelstein, a majority of MKs needed for support.

By no means assured, it's more likely to be denied.

Days before his request, he pressured Israel's High Court not to rule against him on this issue, saying:

"There are those who are trying to drag the Supreme Court into the political playing field in order to besmirch me and legally sabotage my ability to form a government."

"I cannot fathom that the Supreme Court of Israel would fall into this trap. In a democracy (sic), it is the nation that decides who will lead it and no one else (sic)."

Explaining his immunity request Wednesday, he said "I intend to ask the Knesset speaker to let me implement my right, my duty and my mission to continue serving you for the future of Israel (sic)."

Separately he said he'd "come to court and quash all the ridiculous libels against me (sic)," adding:

"The immunity law is intended to protect elected officials from manufactured cases (sic), and guarantee that those elected by the people can serve the people according to their will and not the will of the legal officials (sic)."

On national television Tuesday night, hours before the midnight deadline, he called legitimate charges against him "trumped-up," adding:

"In order to continue to lead Israel to great achievements, I intend to approach the speaker of the Knesset in accordance with chapter 4C of the law in order to fulfill my right, my duty and my mission to continue to serve you for the future of Israel (sic)."

Unmentioned was and remains that his only interest is self-serving, wanting his grip on power maintained, along with avoiding prosecution, conviction and imprisonment.

His letter to speaker Edelstein, written by his lawyers, reportedly asked for immunity on grounds of being unfairly treated (sic) and that prosecuting him would be detrimental to Israeli governance (sic).

In light of strong evidence against him, seeking Knesset immunity appears to be his only recourse to try avoiding accountability, along with the end of his political career.

Last April ahead of Knesset elections, he ruled out seeking immunity from the body.

Despite long odds against getting 61-seat majority support, requesting immunity delays his trial because there's no Knesset House Committee to consider the request until a new government is formed.

If impasse continues after March elections, they'll be further months of delay, Netanyahu remaining prime minister while things drag on.

"It is now clear beyond a doubt that all that matters to (him) is immunity. Israel is being held hostage by (his) personal problem."

Edelstein is "shamefully trying to prevent deliberations on Netanyahu's immunity."

"We did not believe that the speaker of the Knesset would take advantage of his statesmanlike role to make the Knesset a safe house for evading prosecution."

Separately, Gantz said "I never thought I would see a prime minister evade prosecution. Netanyahu knows he is guilty."

"One who believes there will be nothing because there is nothing does not fear coming to trial. It's either the kingdom of Netanyahu or the state of Israel," adding:

If he (Gantz) becomes prime minister ahead, he'll seek to change the immunity law to prevent it from being misused. Seeking support from Knesset members, he asked:

"Did you enter politics to become a political bulletproof vest for a leader accused of corruption?"

Netanyahu reportedly is seeking permanent, not temporary, immunity on dubious claims of "bad faith" charges against him and that prosecution runs counter to the will of the electorate.

Key ahead is how the Israeli electorate will respond to his request. Will his public support increase, decline or remain unchanged?

We'll know following a third round of Knesset elections scheduled for March 2, along with polls from now to then.

A Channel 12 poll released last Sunday showed 51% of respondents against immunity, only 33% supporting it.