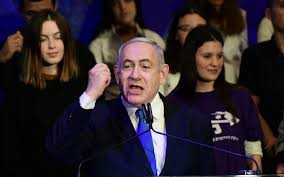 According to the Times of Israel, citing a Channel 13 report, Netanyahu "has made a final decision to ask the Knesset to grant him immunity from prosecution in three corruption cases and informed Knesset Speaker Yuli Edelstein in writing of his intention," adding:

He's "willing to face criminal prosecution, but only after he leaves political life."

Edelstein's office refuted the report, a spokesperson saying: "No request was made."

Before yearend Tuesday evening local time, Netanyahu must formally request Knesset immunity or forgo the chance of getting it, a majority MK vote needed.

It's a mute point in Israeli fantasy democracy, the real thing nonexistent in the apartheid state from inception.

Seeking Israeli High Court of Justice support for immunity from prosecution, Netanyahyu falsely equated Mandelblit's indictment with interfering in "who can run the country and who can't."

Under Israeli law, it's up to a special Knesset committee to decide if the body would vote up or down on immunity. It hasn't been created as yearend approaches.

If March election results again fail to form a new government, disposition of charges against Netanyahu could be delayed months longer — unless Israel's High Court rules on the issue.

He's hellbent to avoid prosecution that will likely convict and imprison him. He falsely called charges against him "rigged," opposition elements conspiring against him (sic).

According to a new Channel 12 poll, 51% of Israelis oppose immunity. Only 33% support it.

According to Israeli Law Professor Suzie Navot, immunity is unlikely for bribery, fraud and breach of trust, only for minor offenses under Israeli law, explaining:

Immunity for Knesset members is "mainly to protect their freedom of speech, for instance, (regarding) offenses such as incitement, racism, support for terrorism, libel."

"Israel doesn't put MKs on trial for such offenses. That's the core of immunity — to prevent MKs from being put on trial for things they say."

"This is called functional immunity, which protects parliamentarians from prosecution for things they did in fulfilling their parliamentary work. This kind of immunity exists all over the Western world."

"A Knesset member shall bear no criminal or civil responsibility, and shall be immune from any legal proceeding, in respect to a vote, an oral or written expression of opinion, or any other act, in and outside the Knesset, if such vote, expression of opinion or act, pertains to or is directed toward the carrying-out of his (or her) mandate as a member of the Knesset."

The above does not apply to major charges Netanyahu faces.

Haaretz editors slammed him, saying he's "exploiting his position in an attempt to evade justice."

"He has dragged Israel into three election rounds only because he's refused to" step down and face accountability, leaving the country in "political deadlock," adding:

"Requesting immunity is a cowardly act by someone who has something to hide."

"Parties colluding with such a request demonstrate their disdain toward the value of equality before the law and the rule of law."

"That is why the coming election will revolve around this issue. Will Israel return to the path of normalcy, or will it give refuge to a prime minister trying to evade justice by using his immunity?"

Israel's High Court is considering whether Netanyahu should step down as prime minister given serious charges against him.

He said neither Supreme Court justices or Israel's attorney general should decide who serves as prime minister.

On Tuesday, the Jerusalem Post said Israel's High Court delayed ruling on whether Netanyahu can remain prime minister, a morning session ending with no decision.

Based on what was discussed, it appeared the justices "prefer to stay out of the issue," the broadsheet reported. A ruling up or down doesn't appear imminent.

If after third-round March elections Netanyahu is still unable to gain majority 61-seat coalition support, what's most likely based on previous election results, perhaps his ability to avoid prosecution and remain prime minister will be weakened or lost.

For now, things remain in limbo at yearend.