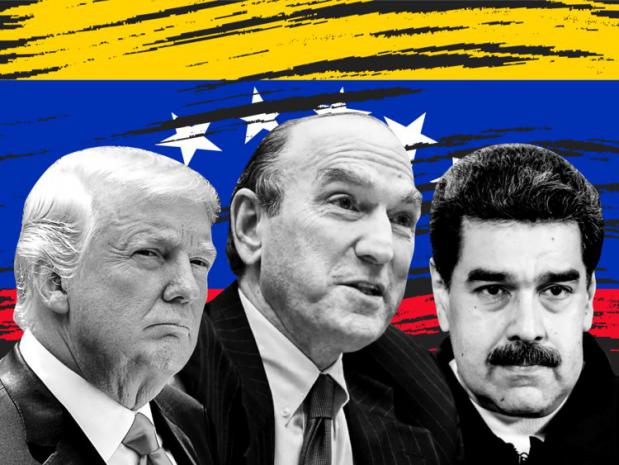 US war by other means on Bolivarian Venezuela was launched by the Clinton co-presidency, continued by Bush/Cheney, escalated by Obama/Biden, and exponentially increased by Trump regime hardliners.

US economic terrorism on the country and its people continues as the new year approaches — failing to achieve its aim, accomplishing only hardships for ordinary Venezuelans, how the scourge of US imperialism operates, an unparalleled global menace.

"The events of recent months have shown that (US-designated) Guaido's project failed," adding:

"Not only has it been bogged down by corruption scandals, but it also carries on the policy of provocative actions."

"Recently, the plans of his fellow party men to attack two military garrisons in the Venezuelan state of Sucre with the aim to seize weapons and continue to provoke armed clashes have been exposed" and foiled.

It's "time for the opponents of Caracas to admit the objective truth. There is only one head of state in Venezuela — President Nicolas Maduro. A compromise decision can only be found through national dialogue."

In mid-December, Maduro said "over 65% of Venezuelans want to elect a new National Assembly on any day in 2020," adding:

"The election may be held on Monday, Tuesday, Wednesday or Thursday. It doesn't have to be Sunday."

Legislative elections are coming in January or on an agreed on 2020 date. If Bolivarian candidates regain control of the body, US hardliners, their imperial allies, and establishment media echo chamber are sure to scream fraud — how they often respond when candidates they oppose win over others they support.

Venezuela's electoral process is the world's best, polar opposite the US money-controlled system, Americans getting the best "democracy" money can buy — in name only, the real thing prohibited.

In Venezuela's it's real, why bipartisan US hardliners want it eliminated, opposing rule of the people governance the way it should be everywhere.

Separately, Maduro said "Bolivarian armed forces are 1,000% ready. We have to defend the right of our people to peace, co-existence, harmony, tolerance, social happiness."

It's "why, like he always says, we need to stay alert and stand side by side with our armed forces that protect our constitution, our president, our land and our people" from the scourge of US aggression.

"There is a perceived activation of trade and some productive activities  as well as a stabilization of the oil activity that stopped falling and there are signs of a recovery (short of an) economic boom."

"Venezuelan authorities have been able to (counter) the blockade and began to evade it, which will allow to progressively recover production, as has happened in recent months."

Recovery is "tortuous and slow…greatly affected by (US)  sanctions that prohibit all types of financial and productive" activity.

Key for Venezuela is loyalty from its key military officials. They rejected millions of dollars in Trump regime bribes.

On Saturday, Maduro praised their commitment to defend the nation's sovereignty and people, saying:

"I am…more optimistic than ever about the future of our nation and more grateful than ever for the loyalty, professionalism and cohesion of the Bolivarian National Armed Forces," adding:

"The Armed Forces reacted to the attacks as a whole, with a slogan that was imposed in this 2019 and assumed by the entire nation: Loyal always, traitors never!"

"We suffered an international conspiracy whose objective was to divide, fracture and destroy the unity, discipline, cohesion and morals of our military forces."

It's "a multiform aggression accompanied by threats of invasion, attempts at bribery, corruption and a structured psychological war so that our military forces would surrender without fighting."

Today he's widely despised, polls showing his support at around 10%, scant numbers turning out to hear his infrequent rants.

Even Trump regime hardliners soured on him. Everything he threw at legitimate Venezuelan governance failed.

When National Assembly elections are held, maybe Venezuelans will vote him out of office.

Why Maduro and Venezuelan judicial officials haven't ordered him arrested for treason, sedition, and/or other high crimes against the state remains unexplained.

Days earlier, Venezuelan Communications Minister Jorge Rodriguez said government investigators uncovered a plot by thugs connected to Guaido to use stolen Venezuelan military missiles to stage a false flag attack on neighboring Colombia by downing one of its air force planes as a pretext for US war on the Bolivarian Republic.

On Monday, the neocon/CIA-connected Washington Post reported that Trump's "personal attorney Rudolph W. Giuliani and then-Rep. Pete Sessions…were part of a shadow…effort, backed in part by private interests, aimed at engineering a negotiated exit to ease President Nicolas Maduro from power and reopen resource-rich Venezuela to (US) business," citing unnamed individuals aware of the scheme that took place in September 2018.