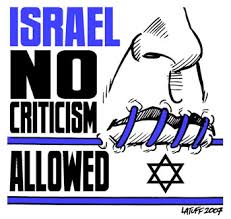 Like other police states, Israel wants the message controlled, views against the official narrative censored.

Independent bloggers and social media activists are targeted. They're required to submit content to a military censor for screening before posting.

Content by individuals conflicting with the official narrative is considered a threat to national security, how all police states operate.

Israeli contempt for international law and its own laws bely its Big Lie about being the region's only democratic state — in its own mind, not reality.

Following its refusal to act responsibly, both organizations petitioned Israel's Supreme Court, arguing that Israeli censorship "violates the constitutional rights to freedom of expression and due process," adding:

The vast majority of Israeli requests to remove online content were obeyed by social media and Google.

According to a State Attorney's report, about 90% of targeted content was partially or entirely removed — mostly on the phony pretexts of "identifying with a terrorist organization" or "incitement."

Only around 1% of online content removed involved charges of racism, privacy violations, sexual harassment, copyright infringement, and other miscellaneous reasons.

No specific information was released on content removed. Israel's State Attorney's office refused to disclose it.

A freedom of information request  by ACRI and other organizations to Israel's justice ministry was rejected — falsely claiming that "exposing the content of posts related to incitement to violence and terrorism may harm various security interests."

Adalah and ACRI slammed what's going on, saying Israel's mechanism for enforcing online censorship "is carried out with no transparency or legal procedure whatsoever, and with no framework for users to defend themselves against allegations that their posts were illegal or warranted removal."

"The mere idea that the state is operating a unit which examines and flags content for 'voluntary' removal according to the companies' own Terms of Service is absurd," adding:

"The Ministry of Justice is suddenly transformed into the 'Ministry of Truth,' constitutional norms replaced with 'Terms of Service,' and the courts with corporate clerks."

"All this is practiced without any legal authority or legal processes whatsoever, in the total absence of transparency, and while exploiting the state's bargaining power as a potential regulator of these companies."

"This policy contravenes the principles of the rule of law in an unprecedented manner under the guise of 'combating incitement and terrorism,' and violates freedom of political expression."

"Moreover, there is a reason to suspect that the victims of these (so-called) violations are first and foremost Palestinians."

Israel's Supreme Court will decide whether the practice of online censorship stands or must be abolished.

Based on past rulings, justice is unlikely to prevail this time.