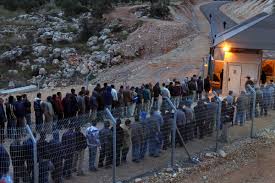 The Ugly Reality of Israeli Apartheid

Last month in an attempt to mobilize support from his base, Netanyahu falsely said "the Arabs want to destroy us all."

Calling on them to issue a restraining order, banning Netanyahu from disseminating racist propaganda intended to incite racist hatred against Israeli Arab citizens and Occupied Palestinians, Adalah said the following:

Netanyahu's hostile remark "demonstrate(d) a marked increase in his racial incitement against Arab citizens of Israel."

"The Israeli Supreme Court (earlier) ruled that Michael Ben Ari's identical statements constituted grounds for disqualification of his candidacy for Knesset, so there is no disputing that this is unacceptable propaganda."

His remark and more like it from him and other hardline Israeli officials contribute to violence against defenseless Palestinians.

Israel is to Palestinians what Hitler's regime was to Jews – in both countries these unwanted people treated like subhumans, forced to endure virtually every type indignity, degradation and crime against humanity.

Palestinians and Israeli Arab citizens are discriminated against in virtually all aspects of their lives.

Numerous laws unjustifiably justify what the worst of apartheid is all about, promoting Jewish ethnic superiority, inciting racist hatred of Arabs.

They promote and permit murder, extermination, enslavement, torture, arbitrary arrests, illegal imprisonments, denial of the right to life and liberty, cruel, inhuman and degrading treatment, and other abusive acts imposed by Jews on Arabs.

Former UN Special Human Rights Rapporteur for Occupied Palestine, Richard Falk, earlier said "Israel is guilty of the crime of apartheid in relation to the Palestine people should be taken with the utmost seriousness by all those who affirm human solidarity and care about making visible the long ordeal of a suffering and vulnerable people."

From inception, Israel is guilty of the highest of high crimes — yet remains unaccountable because the world community supports the Jewish state, doing nothing to hold it accountable, nothing supporting fundamental Palestinian rights beyond meaningless lip service.

Reporting on the incident, B'Tselem said he was shot and killed while "trying to put out a fire started during a clash between soldiers and Palestinian youths."

"Video footage show(ed) him standing in the passageway holding a towel, and slowly making his way forward while waving to the soldiers to signal he was coming."

"When he reached the end of the passageway, a soldier standing further down the road opened fire and hit him in the chest."

His relative Tareq explained the following:

"Some kids were in the narrow alleys and behind the houses, throwing stones every now and then at soldiers who were standing on the road."

"The road passes under my house and the house of Haitham al-Badawi, 'Omar's dad, who's a relative of mine."

"At around noon, soldiers fired tear gas into the passageway between our house and Haitham's. My mother closed the door so the gas wouldn't seep in."

"I looked out of the window that faces west, overlooking the road, and saw about seven soldiers on the street corner."

"Three more soldiers were standing in the corner across from the alley that runs in front of our houses."

"A Molotov cocktail hit the window and the curtain caught fire. A plant outside also caught fire."

"I was about to go outside when I heard a lot of gunshots fired one after the other. My mother made me stay in."

"I heard 'Omar ask for water to put the fire out. I opened the door and stuck my head out to see what was going on."

"Just then, I heard a single shot and saw 'Omar roll down the stairs and out of sight."

"I called out to him, 'Are you hurt' but he didn't answer. I ran outside and saw 'Omar lying on the ground with three journalists and another relative gathered around him."

"He was bleeding from the chest and back. I tried to stop the bleeding with a towel. We picked him up and walked south, shouting for a car to come and get him. 'Omar was badly injured."

"We advanced a few meters and then I heard a stun grenade explode nearby. I realized the soldiers had come back to get 'Omar."

"We tried to carry him into one of the houses, and then a neighbor drove up with his car. We got into the car, with 'Omar lying on my legs."

"About 15 minutes later, an ambulance came and took him to al-Ahli Hospital in Hebron."

It was too late to save him. Omar, threatening no one, was killed by an Israeli soldier who knew he could commit murder with impunity.

"These are the preposterous, outrageous, immoral and illegal circumstances under which the Israeli military killed 22-year-old Palestinian 'Omar al-Badawi, for no reason whatsoever."

Israeli media propaganda reports falsely claimed the soldier in question "felt danger due to the proximity of stone-throwers" — a Big Lie. No threat existed.

When investigations of incidents like the above happen, whitewash always follows, what's unjustifiable justified.

B'Tselem: "(R)esponsibility for al-Badawi's death (falls) not only on the soldier who shot and killed him, but on all those who allow such shootings to recur, time and time again, with no repercussions."

The entire population is brutalized because the world community does nothing to demand accountability for Israeli high crimes.