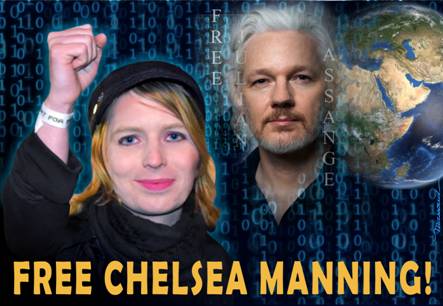 Mass incarceration in the US is a national disgrace, a crime against humanity, including countless numbers of political prisoners — pesecuted behind bars for their beliefs and activism, for resisting the dirty system, judged guilty by accusation.

Julian Assange and Chelsea Manning are best known, Assange imprisoned by Britain at the Trump regime's request, extradition to the US to follow for truth-telling journalism.

Or perhaps he'll perish behind bars because of appalling mistreatment, slowly killing him, including by denying him essential treatment for health issues, letting him deteriorate instead.

Numerous human rights workers, activists for justice, academics, and medical professionals called for upholding his rights — including Doctors For Assange on Monday.

By open letter to Australian authorities, they highlighted a "medical emergency" affecting him gravely, saying:

He "risk(s) death due to (appalling) conditions of his detention in a UK prison."

"(H)aving received no response from the UK Government, we call upon you to intervene as a matter of urgency. As Australian (officials), you have an undeniable legal obligation to protect your citizen against the abuse of his fundamental human rights, stemming from US efforts to extradite Mr Assange for journalism and publishing that exposed US war crimes."

He requires urgent medical treatment in "an appropriate hospital setting," what's unavailable to him under virtual gulag prison conditions.

Without proper care needed immediately, he may "die in a UK prison."

"Medical experts have repeatedly advised the UK Government of potentially catastrophic consequences should it fail to facilitate adequate medical care for Mr Assange."

Britain in cahoots with the Trump regime is killing him slowly. US hardliners likely want him dead to avoid a public trial that'll highlight fraudulent charges against him.

"Should Mr Assange die in a British prison, people will want to know" why Australian authorities didn't intervene for the rights of one of their citizens, the letter said.

"(A)s doctors, (we) feel ethically compelled to hold governments to account on medical grounds speaks volumes about the gravity of the medical, ethical and human rights travesties that are taking place."

"It is an extremely serious matter for an Australian citizen's survival to be endangered by a foreign government obstructing his human right to health."

"It is an even more serious matter for that citizen's own government to refuse to intervene, against historical precedent and numerous converging lines of medical advice."

"We urge you to negotiate Julian Assange's safe passage from Belmarsh Prison to an appropriate hospital setting in Australia before it is too late."

Worldwide pleas like the above for Assange fell on deaf ears in Britain, Australia, and the West overall, this letter likely to be no more effective than earlier efforts on Assange's behalf.

Chelsea Manning was indefinitely detained for invoking her constitutional right to remain silent.

She courageously refuses to give grand jury testimony, potentially harmful to Assange. She won't aid the Trump regime's intent to crucify him for doing the right thing.

Earlier, dozens of US, UK, Australian and Canadian academics, human rights activists and lawyers signed an open letter on behalf of Assange and Manning, saying:

"Over the past decade, Julian Assange and WikiLeaks have revealed human rights abuses and a string of instances of corporate, government and intelligence agency corruption."

"As scholars and citizens concerned with the protection of whistleblowers and a free press, with the ability to hold government to account for such abuses, we call for the immediate release of Julian Assange and Chelsea Manning from prison."

"We reiterate the concerns of the United Nations special rapporteurs regarding the ongoing mistreatment of Mr Assange and Ms Manning by the US and UK authorities, and affirm the statement of the UN Working Group on Arbitrary Detention that 'the right of Mr Assange to personal liberty should be restored.' "

Slow-torture is killing Assange in Britain. From prison on December 17, Manning tweeted:

"celebrating yet another birthday in jail ???? thanks to all of you for your wonderful letters (and dank memes) ?? always thinking of y'all"

Perhaps the above was tweeted for her, along with her opposition to the unconstitutional grand jury process, remarks published on November 20, saying:

"I am not alone in objecting to the grand jury as a dangerous relic that has evolved in ways that increase its power without increasing its protections," adding:

"I refuse to participate in a process that has clearly transformed into something that violates the spirit, if not the letter of the law."

Independent jurists know that the grand jury system is "an unbridled arm of the police and prosecution" — intended to get indictments by fair or foul means.

"The grand jury subpoena, combined with compulsory immunity, gives unrestrained powers to US prosecutors to oppress activists and their communities."

"Although, generally, people have no obligation to cooperate with law enforcement investigations, in the context of a grand jury subpoena, people who refuse to talk about their first amendment beliefs and associations can be locked away, or fined, as sanctions for their principled refusal."

The US grand jury system is a modern-day version of centuries earlier UK Star Chamber court proceedings, convened to convict, not acquit.

The US national security state enforces judicial unfairness, grand juries a tool that facilitates it.

The Supreme Court earlier ruled that federal grand jury prosecutors need not adhere to customary trial rules and procedures. Nor must they reveal exculpatory evidence.

Instead of protecting the public from oppressive government, they function as a "sword" against fundamental constitutional rights, doing whatever it takes to get indictments.

Rife with abusive practices, the grand jury process is an unconstitutional system that should have been restructured or abolished long ago.

It's a secret tribunal, individuals forced to answer questions without counsel protecting their rights.

No judge is present during proceedings to assure fairness. Prosecutors alone decide what evidence grand jurors see, concealing what they wish at their discretion.

Witnesses risk unwitting self-incrimination, even when guilty of no crimes. They're denied their constitutional right to remain silent.

Earlier Manning said she'd rather "starve to death" than give testimony potentially able to be used against Assange.

She's fined $1,000 a day each day she remains silent, amassing an unrepayable debt, facing further incarceration for what the ACLU calls the "debt to prison pipeline" if she's released for what she's detained for now.

Manning, Assange, and countless other US political prisoners face what police state viciousness is all about — the rule of law abandoned in pursuit of its interests.