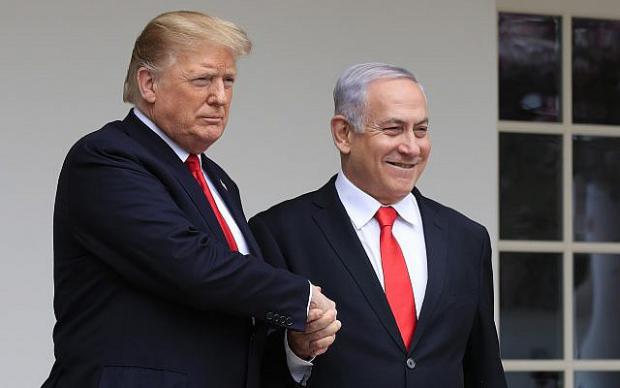 Is a deal in the works for Netanyahu to step down as prime minister in return for a presidential pardon — with the aim of avoiding a third election next year? More on this below.

Netanyahu faces prosecution for bribery, fraud and breach of trust.

Israeli attorney general Avichai Mendelblit said he "damaged the image of the public service and public trust in it (by abusing his office), knowingly "taking a bribe as a public servant in exchange for actions related to (his) position."

Charges against him are over arranging favorable news site coverage and accepting lavish gifts in return for political favors.

He remains prime minister because his Likud party and Benny Gantz's Blue and White party failed to cobble together a majority 61-seat ruling coalition after elections in April and September.

An unprecedented third one looms next year without deadlock resolution. Netanyahu vowed to stay in office despite charges against him. Israeli law only requires a sitting prime minister to step down if convicted.

If impasse is unresolved by December 11, a third election will be called for next year, late February the earliest possible date, according to a Knesset legal official.

Israel's Channel 13 said Netanyahu seeks a deal to let him remain prime minister for another three to six months in return for Gantz's Blue and White party getting key ministries.

Gantz reportedly rejected the offer and earlier ones because Netanyahu can't be trusted to fulfill promises made. Reportedly he said: "I believe him less today."

"We made all kinds of proposals, with all kinds of ways to make sure that this unity government will be stable, but they are simply refusing."

Gantz responded saying: Netanyahu "has been digging in his heels and has not been offering anything new," adding:

"That is not how you conduct negotiations. He needs to look me — and Israeli citizens — in the eye and say what he thinks and wants instead of shirking responsibility."

According to the Jerusalem Post (JP), Israeli President Rivlin "will consider pardoning Prime Minister Benjamin Netanyahu in exchange for the PM retiring from political life and confessing to the crimes of which he is accused, Channel 12 reported Wednesday night."

Earlier he rejected a plea bargain or pardon. So far, he hasn't responded to the latest offer. According to the JP, his former lawyer Jacob Weinroth failed to convince him to take a similar deal earlier.

In June 2018, the JP said Mendelblit supports the above deal. No formal offers have been reported so far.

At the same time, Rivlin has been exerting heavy pressure on Netanyahu and Gantz to avoid a third election — the outcome likely to be similar to April and September results if held, leaving impasse unresolved.

As things now stand, the best chance, maybe the only one, to resolve things and be able to form a new government is for Netanyahu to resign.

It remains to be seen if he'll accept Rivlin's reported offer — stepping down, admitting guilt, and accepting public humiliation in return for avoiding prosecution, likely conviction and imprisonment.

Charges against him omit his highest of high crimes of war, against humanity, and slow-motion genocide against long-suffering Palestinians.

For over a decade, Gazans have been harmed most of all under suffocating medieval siege, an entire population held hostage for political reasons.