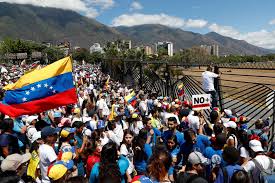 Trump regime economic terrorism on Venezuela includes multiple rounds of illegal sanctions and an embargo — war by other means.

Nations and media supporting hostile US actions against the Bolivarian Republic and other countries are complicit in its crimes against humanity.

US war on the Bolivarian Republic by other means aims to install pro-Western puppet rule, replacing its model social democracy, the threat of a good example since established in 1999.

Nations engaging in legitimate political, economic, financial, and trade relations with Venezuela and other countries it wants isolated face harsh US recrimination.

Blacklisting 29 Venezuelan officials by the Trump regime was the latest shoe to drop.

Abandoning the rule of law in deference to US imperial interests, 15 so-called Inter-American Treaty of Reciprocal Assistance (TIAR) countries banned President Nicolas Maduro, Foreign Minister Jorge Arreaza, Defense Minister Vladimir Padrino, and others in his government from traveling within their borders.

They falsely designated regional peace, equity and justice champion Bolivarian officials "a threat to the preservation of peace and security on the continent."

Like NATO's collective defense Article 5, TIAR states that "an armed attack by any State against an American State will be considered an attack against all American States."

Venezuelan Defense Minister Padrino earlier called the treaty "an instrument of domination and interventionism that goes against the independence and sovereignty of the people, a product of the already obsolete imperialist doctrines that have done so much damage to Latin America."

Months earlier, Venezuelan Law Professor Pablo Aure tweeted: TIAR "will be the instrument that allows the entry of a foreign military coalition" against the Bolivarian Republic.

In September, Venezuelan Foreign Minister Arreaza said "(w)e are ready to protect ourselves. We are ready to react. We will let no one trample sacred Venezuelan soil. We will respond and hope that never happens."

Only 16 of TIAR's original 35 member states remain part of the treaty. In 2014, Latin American and Caribbean countries proclaimed their region a zone of peace — not as long as they surrender their sovereign interests to a higher power in Washington.

Its latest hit piece ignored US war on the country by other means, its illegal sanctions and other forms of state terror, its rage to gain another imperial trophy and plunder its resources.

It never met a sovereign independent government unwilling to sell its soul to Washington it didn't want forcefully toppled and transformed into US client state status.

Trump regime viciousness bears full responsibility for hard times in Venezuela, what the scourge of imperialism is all about — supported by the Times instead of denouncing it.

The record of the self-styled newspaper of record mocks what journalism the way it should be is all about — comforting the afflicted, touching the right nerves, featuring the truth, the whole truth, and nothing but the truth, especially when ugly.

A new Meganalisis poll showed Guaido's support is less than 10%. Only 11% "trust and support" the opposition-controlled National Assembly.

On December 3, Reuters reported that crowds turning out to hear (US-designated puppet) Guaido are a small fraction of earlier in the year numbers, adding:

"(S)ome of his (National Assembly supporters are) jostling for…new leadership…Maduro's grip on power seems to be strengthening." Guaido "missed his moment."

According to Caracas-based political analyst Dimitris Pantoulas, "(t)he political reality we have had in Venezuela for the last 10 months has finished."