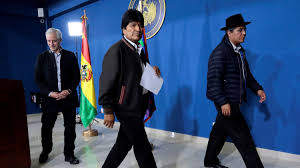 The Times long ago abandoned journalism the way it's supposed to be.

It's so-called "standards (of) ethical journalism" are pure subterfuge.

"(C)over(ing) the news as impartially as possible…avoiding conflicts of interest," and operating "fairly and openly" are polar opposite its support for wealth, power, and privilege at the expenses of world peace and the public welfare — notions it abhors.

The "highest standards of journalistic ethics" are absent in its daily edition on issues mattering most — state-approved propaganda replacing it, notably on geopolitical issues.

"The Times and its staff" consistently fail to deliver "impartiality, accuracy and integrity" in its daily editions, exercises of deception over truth and full disclosure — rubbish over reporting what everyone has a right to know.

The Times never met a bona fide democrat it didn't vilify or a US-supported despot it didn't cheerlead.

Friedman willfully and deceptively lied, falsely claiming "(t)he most significant reform process underway anywhere in the Middle East today is in" the kingdom.

"The crown prince has big plans to bring back a level of tolerance to his society."

Ignored were the above high crimes against humanity, kingdom complicity with US wars of aggression, its support for ISIS and other jihadists, and nearly five years of genocidal war in Yemen, killing a nation and its people in cahoots with the US, NATO and Israel.

Reinventing history is longstanding Times policy. Days earlier, it falsely accused Bolivia's Evo Morales of "brazenly abusing the power and institutions put in his care by the electorate (sic)," adding:

The Times and other major media falsely claimed his October 20 reelection "was in dispute…Protesters (in) the streets" were CIA recruited hooligans, what the self-styled newspaper of record and its counterparts suppressed.

The Times and other establishment media support the illegitimate action, what no just societies anywhere would tolerate.

On Friday, the coup d'etat regime falsely accused Morales of sedition and terrorism. If returns to Bolivia where he belongs and wants to be, he'll likely be arrested, imprisoned, or maybe killed — for wanting democracy over pro-Western puppet rule.

Members of his ruling Movement for Socialism (MAS) party have been pressured and threatened to support the coup or face arrest. Some fled abroad. Others sought refuge in foreign embassies.

Democratic Bolivia was transformed into a fascist dictatorship, the latest US imperial trophy.

What CIA handiwork installed, Bolivians for equity and justice can reverse by refusing to accept the unacceptable.