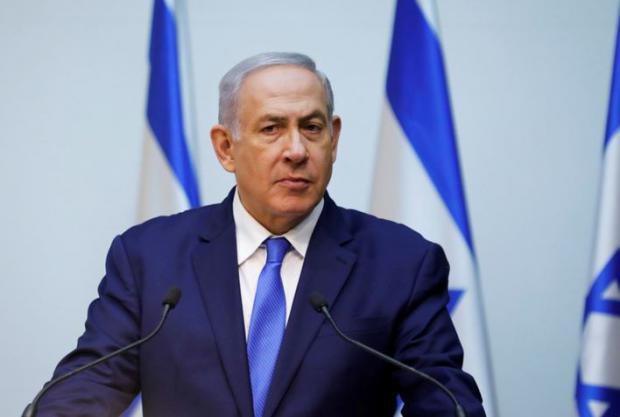 He's charged with fraud, bribery and breach of trust, Israel's first ever sitting prime minister to face prosecution for these serious offenses.

Hard evidence against him is damning. His scourge appears coming to an end once the legal process expected to take time plays out.

Saying he conquered Israel suppressed his high crimes of war, against humanity, and other offenses — compounded since then.

The puff piece also ignored his deep-seated corruption, his governance of, by, and for privileged Israelis exclusively, his persecution of Palestinians for not being Jewish, his tenure exceeding Sharonian evil.

Arundhati Roy once called India a "limbless, headless, soulless torso left bleeding under the butcher's clever with a flag driven deep into her mutilated heart."

The above describes Israeli regimes throughout the country's history, notably during Netanyahu's time in office — his agenda pockmarked with malign viciousness, institutionalized racism, militarism and belligerence, exploitive cruelty, occupation harshness, neoliberal rapaciousness, and wars at his discretion without declaring them.

Governing anti-democratically with an iron fist, he spurns regional peace, stability, equity, justice, and the rule of law — notions he abhors.

He once called no-peace/peace talks with Palestinians "a waste of time." He wants all valued parts of Judea and Samaria unlawfully annexed, Palestinians dispossessed for Jews-only development.

He's losing the fight for his political life and ability to remain free from incarceration.

A psychopathological liar, he falsely called criminal charges against him fabricated, "an attempted government coup against the prime minister through blood libels and a biased investigation process (sic)."

According to Israel's Channel 12, he's losing Likud support, saying senior party members admit that "the Netanyahu era is over," plotting behind the scenes to remove him as party leader following AG Mandelbit's indictment.

A Channel 13 report was similar, Likudniks saying: "We are trying to figure out how to wrest the party from his hands."

Senior party members reportedly are seeking consensus on who should replace him.

Channel 12 and 13 said Mandelblit won't demand he resign as prime minister unless convicted, but will insist he relinquish four ministerial posts he holds — agriculture, health, social and diaspora affairs.

Until recently, he also held the foreign affairs and war ministry portfolios.

On Friday, Ynet News said Mandelblit will likely issue a legal opinion, saying "significant legal difficulties" stand in the way of affording him a mandate to form a new government — given serious charges he faces.

Though Israeli law permits an indicted prime minister to remain in office unless convicted, the issue was never judicially ruled on in Israeli history.

Its Supreme Court may have final say on it given serious wrongdoing Netanyahu is charged with, making him politically damaged goods.

According to a Friday published poll, 56% of Israelis want Netanyahu to resign. Only 35% support his staying on as prime minister.

According to Israeli Law Professor Suzie Navot: "All of the questions that we are dealing with now are new questions for Israel. We've never been in this situation. It's unprecedented."

He may be losing US establishment media support. The NYT accused him of "attack(ing) his country's institutions," adding:

"(H)e turned viciously on the police and prosecutors, urging Israelis to 'investigate the investigators,' warning of an 'attempted coup' and vowing not to step down."

"It was a hard conspiracy theory to swallow, as the attorney general, Avichai Mandelblit, had been appointed by Mr. Netanyahu and had once been his cabinet secretary."

Separately, the Times said if Netanyahu's "allies don't make him stand down, we are headed for chaos," adding:

"The right way out of this sorry situation is for Mr. Netanyahu's party and his allies to step up — and tell the prime minister it is time to step down."

"Some (Netanyahu) supporters are sticking by him, while others are wavering."

"(S)ome rock-solid Netanyahu voters who expressed doubts about the criminal charges said that it was untenable for him to try to continue in office while he defends himself in court."

Members are "increasingly calling for a leadership vote as they question Mr. Netanyahu's ability to lead them to victory in a new vote."

"On Friday, some members of Likud's governing body said the party should hold primaries to choose a new leader that could try to form a new government to avert a third election and give Mr. Netanyahu time to address his legal issues."

He can't deal with legal proceedings against him, run Likud, and govern as Israeli prime minister at the same time.

The Journal cited Likudnik MK Yoav Kisch, saying primaries are inevitable to decide who leads the party ahead.

"Other Likud members also acknowledged a growing frustration with Mr. Netanyahu's legal struggles and its harm to the party's electoral fortunes," the Journal reported.

"Other Likud members also acknowledged a growing frustration with Mr. Netanyahu's legal struggles and its harm to the party's electoral fortunes."

Haaretz editors called for him to "go home now," adding: "Anyone who expected a modicum of proper conduct from the prime minister saw once again his colossal irresponsibility," adding:

"Netanyahu proved that Israel is not his top priority, but rather a means for him to continue in office."

Separately, Haaretz said he "won't go quietly and will opt for the burning torches."

Resolving his political and legal status has a long way to go, the likelihood of his remaining PM and prevailing judicially weak at best.